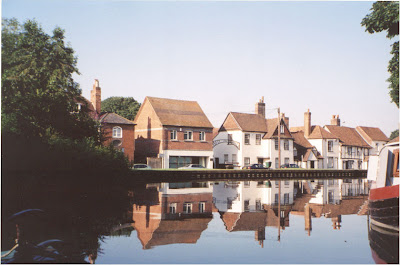 Welcome to my very first Photo Fest! I've centered the canal scene above because I consider it the best photo I ever took. Time: Sunday morning, c. 8:00 a.m., along the Kennet & Avon canal in Newbury, England. A moment later, a swan swam past, disturbing the glassy surface.
Directly after returning from a week floating at 3mph along the K&A canal, and considerable effort from crew and passengers to traverse seventy-two locks in the process (!), I wrote a saga of the whole trip, which can be found on my website at www.blairbancroft.com. If you'd like to view more details about Britain's canals and this trip, in particular, please look under "Random Musings." Today's blog is mostly photos. Special note: these photos are scanned from traditional photos. My old "film" Nikon survived until December 2010, when I finally, reluctantly, went digital. 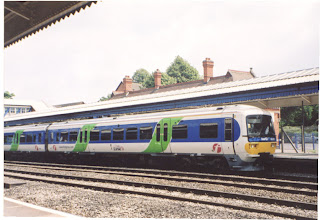 If you need to get anywhere in England, Scotland, or Wales, you have only to look at the train schedules. I was worried about getting from Gatwick to the small town of Newbury where my seven-day canal journey to Bath would begin. Big laugh. Trains ran almost every hour. Then a short taxi trip to the canal - so efficient, in fact, that I beat our Hotel Boats, Duke & Duchess, to their mooring. 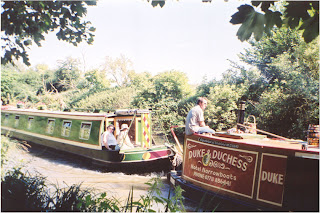 This is how we traveled, one boat towing the other. The two boats coupled, side by side, however, to go through locks and for meals and overnight. Most of the cabins were on one boat, kitchen and dining on the other. We had to be nimblefooted enough to step from one to the other.

After a crew member uses a windlass to "unlock" the swing arm on each lock, the long board that opens the heavy wooden gates, is customarily swung open by "putting the bum to it" as the

Brits say, a task usually performed by passengers instead of crew. As the gates swing open, the water begins to pour in, filling the lock. 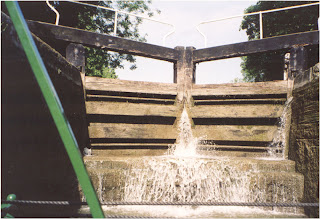 As we left Newbury, we went "uphill" for some time. When we reached the top and started down the other side of the long climb, the narrowboat moved straight into the lock. Through a similar procedure to the above, the gate is closed behind it, then the front gate is opened to drain the water out and lower the boat. All openings and closings are manual. No handy-dandy electrical switches to magically move all those tons of water for you.

The scenery was consistently bucolic. Except for the moments when trains zipped by on tracks that frequently paralleled the canal, we had the feeling we were truly traveling as narrowboats did a hundred or more years ago. Well, we didn't h

ave a horse on the towpath, of course, but we did pass a tourboat that was giving its genuine tow-horse a rest in the shade. 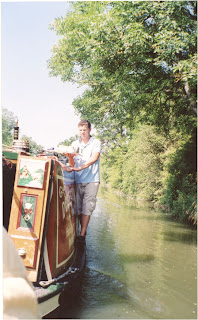 We ate five times a day, not counting the captain himself bringing coffee to our cabins at eight a.m. Meals were: Breakfast, elevenses, lunch, tea, and supper. The photo on the left shows how elevenses and tea arrived while the boats were moving. And keep in mind that Vehan (from the Netherlands) had to jump from one boat to the other before walking that 6" catwalk carrying a tray!

Grace note: Because of the difficulty of maneuvering all these photos into place - they insist on loading at the top of the page! - I'm going to continue the canal photo essay next Friday. This will include photos of crossing a ravine and railroad tracks on a 200-year-old aqueduct, a truly eye-popping experience.


I'd also appreciate your comments on this very unusual trip (at least by U.S. standards - all the other passengers were British). Who among you would enjoy the peace and quiet, and who would go stark, raving mad with seven days at 3mph?

If you're a peace and quiet fan and would like to know how to take a canal trip on Duke & Duchess, here's the website: http://www.hotelboat-holidays.co.uk/