The Youth Choir at Episcopal Church of the Resurrection was making a video in the church when someone's Labrador Retriever got loose—no, don't ask what it was doing in the church!—and charged straight up the aisle. Fortunately, the choir director had his camera handy for a host of spontaneous expressions no one could ever capture in a posed photo. 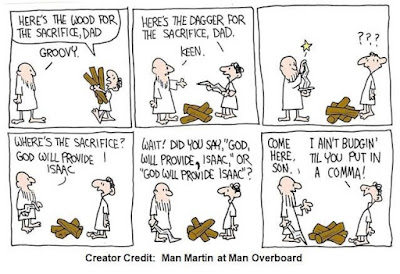 Triumph of the Week:

Our Cassidy (age 15) has been a member of the Police Explorers for some time, though most of the members are older than she is. This week, in competition with students of both sexes, using a Glock 34 at a range of 25 yards, she won the marksmanship competition. If you think it was a simple Point & Shoot like a Carnival Gallery, see the photo below. Cassidy's team also won a First overall. Hence, the two medals in the photo below. 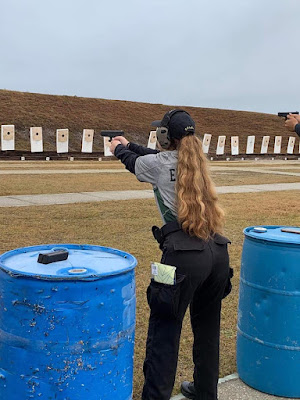 And for a soothing finish to this week's gallery . . .

On the right, a glimpse of the blanket I made for Willow's mommy.

This is an old topic, but it came up again in a workshop this week, and I figured it was important enough to bear repeating.

1.  Editing and Proofreading are two different skill sets and should never be confused with each other.

2.  Proof of this is the difference in salary between those who work in the publishing industry as Editors and the often-times "piecework" hires of the grammar nerds who proofread. (Although I can hear Editors all over the country sighing at this implication that they are paid well.)

5.  Proofreaders look for typos, missing words, repeated words. Should that semi-colon be switched to a dash? Did someone's eye or hair color change from page 8 to page 108?

6.  Both Editors and Proofreaders notice Dangling Participles, so avoid them like the plague!

7.  Very few people are good at both Editing and Proofreading. In fact, the skills are almost diametrically opposed. Editors, if doing their job properly, become too absorbed in what they're reading to pick up on the little things. An editor is looking at the overall effect of your work, trying to find ways to make it better, while a proofreader concentrates on the "little things" - so much so the full effect of the story becomes secondary. The proofreader is there to find mistakes, not enjoy your book. (Although I treasured the note from the proofreader of one of my Signet Regencies telling me how much she enjoyed the story!)

I list the above because in a world with so much indie publishing, many authors need to hire an editor or proofreader, and it's really necessary to understand the difference between the two. Yes, most editors will note typos if they see them, but that's not their main function. Editing is a skill requiring experience and a feel for the Big Picture, while almost anyone with a gift for details can serve as a proofreader.

I personally have a Editor's mind. When my husband and I were running a small educational publishing company, we hired a neighbor to proofread all our books. The wife of a Yale professor, she had an almost uncanny knack for finding mistakes we had all missed through the slow typeset/cut&paste world we lived in at that time. I've always thought of Proofreading as more of a "born gift" than a learned skill, while Editing takes a lot of experience, both in what it takes to make a good book and the ability to explain why changes need to be made.

Grace note:  Since this is Black History Month, my husband and I were very proud of the fact that we commissioned and published The Black People of America, the first Black History text for Middle and High Schools (distributed by Macmillan). My husband went to the library in Harlem and took an enormous number of photos, fitting them into the text I typeset in the painstakingly complex Cut & Paste method required before computers took over the publishing world.

Summary:  almost every indie author needs an editor and a proofreader, but since that tends to be cost-prohibitive, unless you are a good self-editor (which skills I've been preaching since 2011), an editor can do the most for your book. (Hopefully, you can find an accommodating relative or friend with the picky-picky skills of a proofreader.) But NEVER, ever hire a "proofreader" thinking you're going to get the professional advice of an editor. Repeat:  Editing and Proofreading are two different skill sets. Don't be confused into hiring the wrong person for the job.

The Crucible Kingdom, a spin-off from the Blue Moon Rising series