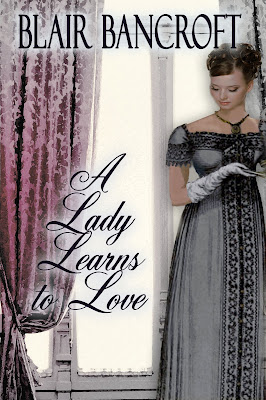 "Way back when," The Last Surprise was published in both print and e as part of a Christmas anthology. I always felt it needed more words than an anthology allows to give this poignant tale of three orphaned sisters the rich texture it deserves. So over the last few months, A Lady Learns to Love has been given a new title, expanded by ten thousand words, and revised, line by line, in an effort to more thoroughly portray Lady Christine Ashworth and her struggle to overcome a series of disasters that have left her incapable of appreciating the blessings right under her nose.

As mentioned in Part One of "Creating Secondary Characters, there are very few "rules." You can be as creative as you like when crafting the characters around your Protagonist(s). But there are one or two things that that are mandatory.

1. NEVER allow your Secondary Characters to overwhelm your Main Character(s). Think of this as the Cardinal Rule of writing Secondary Characters. They are there to provide color and contrast, a sounding board for the hero or heroine. Sometimes they are a pivotal part of the plot, but be extremely sparing about allowing them a Point of View. Do not use them to "tell" us about the Main Characters. Secondary Characters can be wonderful, but they must remain SECONDARY. Do not let them seize the bit and run with away with your story. If you have a Secondary Character you like that much, do what so many other authors have done in the past—give that person his/her own book.

2.  IDENTIFY. Secondary Characters, like Main Characters, need to be identified when they are first introduced. This does not mean you go into a detailed description which brings the story to a dead halt. [Vic's sister, Jane. Mrs. Knightly, my next-door neighbor. She'd known Ben since third grade. He served with Tim in Afghanistan.]

3. SECONDARY CHARACTERS IN ROMANCE. It is even more essential in Romance that you never, ever allow the Secondary Characters to detract from the Hero and Heroine. They can add color, aggravation, and/or comedy to your story, but keep them in their place. Readers want to see the one-on-one relationship between the Hero and Heroine, not a whole slew of distractions. Which means that the use of Secondary Characters tends to be less in Romance than in other genres.

4.  SECONDARY CHARACTERS IN MYSTERY & SUSPENSE. Here, the role of Secondary Characters is a bit more murky. Do the person or persons who meet with disaster in the opening scene count as Secondary Characters or are they merely Victims? I'd say that depends on the author. In some books, particularly well-crafted mysteries, the detective— whether law enforcement or private—gradually uncovers so much information about the victim that that person becomes a true Secondary Character, even though he/she died in Chapter One. In other books, the Victim never rises to the true definition of a Secondary Character. But RULE ONE still applies. Never let any Secondary Character, no matter how interesting, distract the focus of your story from the Main Character(s).

I am currently reading Lethal White by Robert Galbraith. What a magnificent panoply of Secondary Characters! Yet there is never the slightest doubt that the story revolves around Cormoran Strike and his partner Robin.

And then there's Janet Evanovich. What an incredible string of Secondary Characters she has crafted through 20+ books in her Stephanie Plum series. Stephanie Plum series, hmm. That means Joe, Ranger, Lulu and Gramma Mazur are Secondary Characters. (Ranger & Lulu very much so in the early books.) Yes, they've become favorites, with actual "rooting sections" for Joe vs. Ranger, but the books are still Stephanie's. She's the Main Character in every last one, and Ms Evanovich never lets her readers forget it. YOU mustn't forget either, always keeping your Main Character(s) to the forefront and keeping those pesky Secondary Characters for window dressing.

If you'd prefer more classical references . . .
When it comes to Secondary Characters, you can't do better than Shakespeare. His plays are peopled with veritable hosts of Secondary Characters, even his darkest tragedies alleviated by contrasting comic scenes. Where would Hamlet be without Polonius or Rosencrantz and Gildenstern? Romeo and Juliet without Mercutio or the Nurse?

Exceptions to the "Rules":

As much as Regency authors like myself are devoted to Georgette Heyer, she has a couple of books that make me grind my teeth. They are books where she features a Secondary Character over what I consider the "heroine" of the story. In these books the Hero, being a hero, is attempting to help some silly little twit throughout the entire course of the book, while the Hero's intended languishes in obscurity. Frankly, I just want to grab up these silly flibbertigibbets and give them a good spanking for embroiling the poor hero in their stupidity. And yet, the first, or even the second, time I read these books, I believe I enjoyed them at their face value, agonizing over all the impediments that cropped up to defy a happy ending. No more. I've grown too wise to the "whys" and "hows" of writing a book. But that doesn't make them bad books. Just examples of what a highly successful author can get away with—but definitely not recommended unless you already have a devoted following.

I realized as I wrote these two articles on Secondary Characters that Gothic novels, such as my Regency Gothics, also violate the "rules" for Secondary Characters. They are considered Romance, and yet they are written like Mystery or Suspense with a single Main Character, relegating the Hero to the role of Secondary Character. An inevitability with books written in First Person. And also part of the "aloneness" demanded of the Heroine of a Gothic tale. The threatening atmosphere, the suspense, the deaths are the primary ingredients of these stories. And the Heroine is primary. The Hero, of necessity, must remain somewhat in the shadows, both heroine and reader never quite certain of his love or loyalty. (That said, I'm about to violate that in my latest, The Ghosts of Rushton Court—or maybe not—I haven't quite gotten that far yet. Being an "out of the mist" author, who knows what will happen when I actually begin to type?)

Examples from TV and the Movies:

In the examples above, I hope everyone found at least one author whose work was familiar. If not, here are examples from the worlds of Star Trek and Star Wars.

Incredible as it may seem, Mr. Spock started out as a Secondary Character. So did the rest of the bridge crew of the Enterprise, but they ended up as the best known ensemble in the history of television or the movies. I suppose that doesn't make them all Main Characters, but they took their characters far beyond their initial characterizations. Secondary Characters on steroids.

Luke Skywalker started out as the young hero of Star Wars but gradually became a Secondary Character as the long-time series progressed, possibly due to the scriptwriter's plans, or perhaps more because Han Solo and Darth Vader stole the limelight. And what about Chewbacca, R2D2 and C3PO, surely some of the best-known Secondary Characters of all time?

SUMMARY.
Secondary Characters are wonderful, providing support, sounding boards, color, comedy, heartbreak . . . whatever your imagination can think up. But DO NOT ever allow them to overshadow your Main Character(s). They are there to support and defend, not take over the story. Does your genre allow a Secondary Character to have a Point of View? Make sure you know that before you sit down to write. In Romance, probably not. In Mystery, Suspense, Sci Fi, and other genres, the rules are more flexible, but never waver on Rule One: Secondary Characters must remain Secondary Characters. Do not let yourself become so fascinated by these people you've created that you let them detract from your focus on your Main Characters or on your Plot.