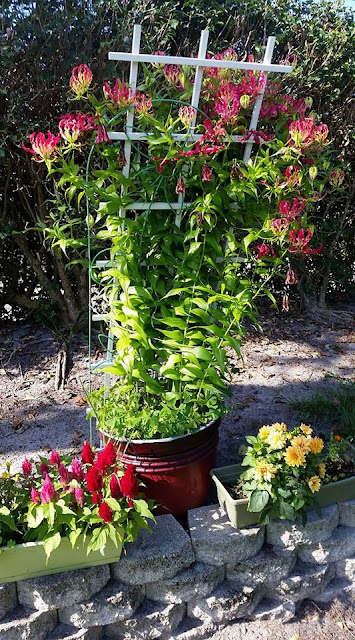 After ten straight days of rain - a new record - the sun came out and my back garden perked up. The tall plants are Gloriosa Lilies, perennial, once-a-year bloomers just beginning to flower when the deluge started. And now we're promised a weekend of rain from Alberto, the first tropical depression of the Hurricane Season (which doesn't officially begin until June 1).

Many of you will recall my posts about the Great Florida Python Hunt, which was an annual event for several years, until the state realized that amateur hunters were never going to be able to rid the Everglades of its python problem. (Background: too many pet owners decided to ditch their overgrown pets in the Everglades, and the huge snakes have reached the point of disrupting the ecosystem by eating the creatures that crocodiles, alligators, panthers, and other native animals feed on.)

So for the last couple of years, the state has employed 25 professional hunters to cut down on the python problem. An article in the Orlando Sentinel (May 25, 2018) announced the demise of the one thousandth python. Average length: 9 feet. Longest: 18 feet. Sadly, the problem continues. One hunter said: "You used to drive in the Everglades and you would see, easily, 20, 30, 40 rabbits on any given morning. I've only seen one since starting this program—one, and he looked scared."

Way back in March of 2011, I posted a list of ASCII codes I found helpful in my writing. Today I'm going to repeat a few of those and add a list of the most helpful shortcut codes in Microsoft Word. Windows menus are great—I recall the world of computers before Windows!—but using shortcuts is even faster. I hope you will find the ones listed below as much help as I have over the years.

Control + Enter.  While I'm at it, here's an important code that works across all word processing programs. It's the shortcut for Hard Page End, the requirement for the end of every chapter. (While editing and judging contests, I've been astonished by the number of people who don't seem to know this basic of Fiction and non-Fiction writing.)

ASCII CODES - These shortcuts have been around as long as computers. They were built in before word processing programs even existed, and they have stayed, "grandfathered in" for any and all who know enough to use them. They seem to work anywhere, any time—in word processing, in email, on Facebook, Twitter, etc., etc. Try it, you'll like it!

Grace note: If you would like a longer list, please see Archives, March 18, 2011. Or you can google ASCII Codes and find a list that goes into 4 digits.

To make ASCII codes work, use your Keypad with “Num Lock” ON. Press Alt + the number. (Sorry, I don't believe there's any way to use ASCII codes if you don't have a keypad.)

You will also note that in most cases there is a correlation between alphabet & action, making the codes easier to remember.


ROYAL REBELLION, the final book of my Blue Moon Rising series, is now on Pre-order at Amazon. Click here. Books 2 & 3, SORCERER'S BRIDE & THE BASTARD PRINCE went on Kindle Countdown May 25 (beginning price - 99¢). [My apologies, but Book 1, REBEL PRINCESS, is published by Kindle Scout and I have no control over when they put it on sale.]

And here's a peek at the social media ad created for ROYAL REBELLION, which goes live on June 14: 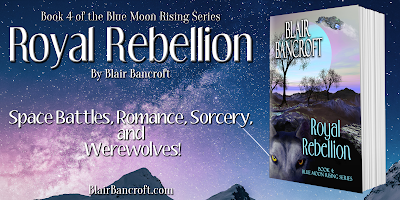