Here are three rather different recipes I have enjoyed over the last few weeks:


This is one of the most exotic tastes I have encountered among the many recipes I've collected. I prefer it served warm and with pine nuts in place of pumpkin seeds, but that does not affect the overall flavor impact, which is truly remarkable. This recipe is from Grits and Pinecones. Below is the original recipe for 8 servings. I halved it for my personal use.

Grace note for Recipes One and Three:  If you a serving only 1 or 2 persons and expect to have leftovers, do NOT mix the dressing with the salad ingredients. Save and use only when needed, so salad greens do not wilt nor the flavors become overbearing.

*I actually found jarred strips of roasted pepper, but this is rare.

Make dressing ahead. Combine all ingredients in a jar and shake until well mixed.

Assembly:
Put the roasted sweet potatoes in a large bowl. Add the cranberries, scallions, roasted red pepper and half of the dressing. Toss carefully & taste. Add additional salt and pepper if needed, and more salad dressing if you like. Sprinkle with the toasted pumpkin seeds. Serve warm or cold.


Grace note: for this one you will need the help of a "spiralizer." I bought mine online from Amazon, along with a recipe book with a lot more "spiral" recipes. If you really can't get into fruits and vegetables, this might be a way to make them more interesting. Here's what I bought:

*I used pre-cooked Perdue chicken pieces
**I used the spiral cutter blade on the spiralizer to cut very thin apple "flowers." Or you can use a mandoline* to cut finer slices than is possible by hand.

2.  In a large skillet, heat 2 TBsps of the oil over medium-high heat. Add garlic; cook and sir 2 minutes or until starting to brown. Add zucchini noodles; cook and toss with tongs 1 minute. Transfer to a serving bowl. Add walnuts to skillet; cook and stir 1-2 minutes or until toasted. Add to bowl with zucchini. Sprinkle with salt.

*I later bought a mandoline by Kitchen Bask, which slices at both 1.5 and 2.5, as well as having three other types of blades. (I am still experimenting with my two new gadgets, but so far they work as promised, and they have definitely increased my interest in fruits and vegetables. And added a whole new frontier of recipes.) The recipe above is from Paleo Recipes. 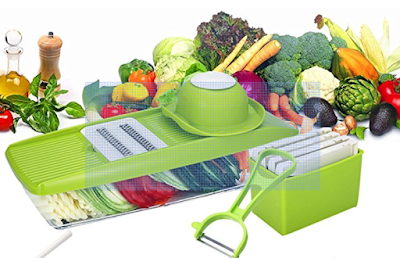 Grace note: I used the 1.5 slicer blade to cut the red onion very fine, making it more like ambrosia than an onion. 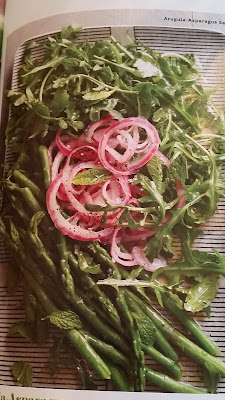 1.  In a small bowl, combine onion and vinegar, pressing onion into liquid to cover as much as possible. Cover and let stand at room temperature 30 minutes or chill up to 24 hours, stirring occasionally.

2.  Cook asparagus, covered, in enough boiling water to cover 2 to 3 minutes or until crisp-tender; drain. Rinse with cold water to cool quickly; drain again. In a large bowl combine asparagus, arugula, and mint.

Added note: If asparagus spears are thick, cut in half lengthwise.

This recipe is also from Paleo Recipes.