The Tale of Squeak

(One more drink selfie for our collection, which extends from the Caribbean to Istanbul)


Florida Wildfire Update: 2,600+ fires this season have burned over 700,000 acres. A number of years ago I used this annual Florida problem (tho' worse this year) in my Romantic Suspense, Paradise Burning. Oddly enough, I wrote the book about three years before the area (east of Venice, Florida) suffered a severe burn similar to the one in my book. 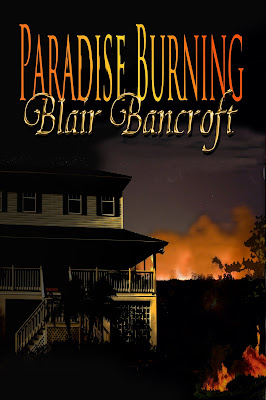 Whether in writing or in speech, the repetitive use of the simplest adverbs, such as "very," is a sign of a sparse vocabulary, lack of imagination, and disregard for those who must listen to this paucity of creativity. At least that's how I see it. Yet there seem to be people out there gullible enough to believe the person who keeps repeating how "very, very good," or "very, very great," something is, no matter its dubious merit. Does the believability of an "alternative fact" increase with each "very" used?  Does calling the truth a lie ad nauseum make it a lie? If so, God help us all.


Except for Mother's Day, this could be called Disaster Week. The following photo was taken at the jetties in Venice, Florida, where I lived for 25 years. The jetties mark the only access between the Gulf of Mexico and the Intracoastal Waterway for 20 miles in either direction. I've sat there, eating lunch at one of the many picnic tables and enjoying the view countless times over the years. Last week a man and his daughter somehow drove off the jetty parking lot into the swift-moving current. All efforts to save them failed. 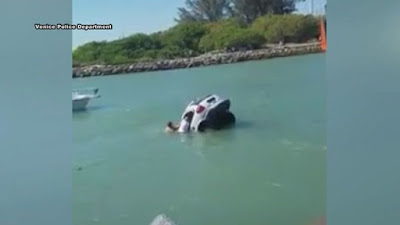 Grace note: After a traumatic experience with my cat, I have postponed my comments on the verb "to be" until next week, so I could share with you . . .

The Tale of Squeak
A Story for Animal Lovers Everywhere

Once upon a time there was a small, dark calico kitten. It was winter (2016) and she needed warmth. Or possibly she was just seeking shelter. You see, she was a feisty little kitty, her mommy most likely a tame housecat, but daddy . . . ? Well, from the kitten's subsequent behavior, one can only assume daddy was a big, tough, feral cat with an aggressive streak a mile wide.

"Kitten" may have been given into a loving new home for Christmas and disgraced herself by biting and scratching (which sweet little kittens aren't supposed to do, particularly around children). Whether she was tossed out or ran off remains unknown, but somehow she found her way inside the hood of a car. (From the way she remains terrified of the sound of a car engine to this day, she may have actually been transported "under the hood" from her original location.)

Late last January, my daughter's neighbor was about to start her car when she heard a noise. It couldn't have been more than a distressed "squeak" because that was the best this little kitten could do. Fortunately, the kitten was rescued, but the woman had dogs and could not keep her. She turned to my daughter whose elderly and settled cats wanted no part of a kitten. So I was asked to kitty-sit until someone was found to adopt this feisty little scrap of fur (who is sitting in my lap as I type and just tried to nip me because she thought I was going to move her!)

Yes, you guessed it. "Squeak" and I bonded, even though she was clearly traumatized and the most aggressive, unfriendly cat I had ever seen - and I've had cats all my life. Squeak became my rescue project. Fortunately, it was obvious she'd had a proper upbringing. She was perfectly sandbox trained and flealess, though a bit on the scrawny side since she'd obviously spent several days on her own. So off to the vet for whatever a poor lost kitten needed . . . and that's when I discovered she was a shameless flirt. Bite or scratch the male vet? No way. You would have thought she was the poster child for meek and mild kitten of the week.

In reality Squeak bit, scratched, and generally fought her way through the world for most of the next year. I had to have a squirt bottle of water handy for the grandgirls and myself for the times her biting got out of hand. We also had to enclose her with a pet gate to keep her from jumping into the middle of both cooking and sewing projects with disastrous results. It's only in the last two or three months that she's begun to settle into a more tranquil animal. (Though I still have bites and scratches here and there to prove she's not totally reformed.)

It wasn't as if she didn't recognize that I had rescued her. For weeks she followed me from room to room, never letting me out of her sight. And over the months she's become a real cuddle cat, sweet as pie until you tried to move her! Or didn't open her cat can fast enough. Or tried to stop her using the sofa as a scratching post. (Of course she won't go near the fancy scratching post I bought her, even when I doused it in catnip.)

I installed a cat door to the screen porch because Squeak obviously loved the outdoors, zipping by me to get outside any time she could. But every time she got away, she was back within 15-20 minutes. I got in the habit of propping the outside screen door open so she could find her way in on her own. At night, when she'd stay out longer, she'd pop back in every 20 minutes or so, checking in, her version of "Hi, Mommy, I'm fine."

The phone repairman was here, and we left the kitchen door open as we moved from house to garage. I didn't see Squeak run out, but it was inevitable as she races through any open door. While in the garage, I heard her cry out, the loudest, most alarmed noises I'd ever heard from her. I rushed out but saw nothing. I decided it must have been one of the screechier birds in the neighborhood and thought nothing more about it. Until an hour later when the phone man left and I realized Squeak hadn't been parading up and down in front of him, doing the "flirt" routine she does with all repairmen who come to the house.

I started searching, calling, looking in all her favorite hiding places. No Squeak. I remembered there had been a strange white car parked in front of my neighbor's house. I'd assumed it belonged to one of the workmen at the house across the street. But when I asked, I was told no. Then I remembered comments on our neighborhood e-mail loop about a mysterious white car that had been seen parked in various places where it didn't belong. I asked for more information about the car, describing it on the loop, and received several replies confirming that this late-model car, perhaps a Lexus, had been seen several times in different places.

The hours went by. I was devastated. There was no doubt in my mind Squeak had been cat-napped. But why? She's about as far from an expensive purebred as one can get. A Mother's Day present? Well, they were in for shock if they wanted a sweet, friendly little kitty. But would they just toss her out someplace where she couldn't find her way home? Or had she been catnapped by someone sadistic? That thought really hurt. I remembered the alarm in her cries that morning and was sick. My only hope was that it was a prank, and after dark she would be returned.

I was heartbroken. I could not believe how much that scrappy bit of fur had come to mean to me. Come nightfall, I propped open the outside screen door. I watched television. I waited. Nothing. At 10:20 I went into my bedroom and began to read. At 10:30 - nearly 12 hours after her disappearance - I heard the distinctive flop of the cat door between the screen porch and the living room. And there she was. Totally spooked. She wouldn't let me touch her. She ran from one end of the house to the other several times before finally going into her favorite hidey-hole, a shelf in my closet where she is totally hidden behind my hanging clothes. Except for coming out to eat, she stayed there for two days. When she finally emerged, she either cuddled next to me or squeaked anxiously at my feet for a whole week before finally, within the last couple of days, returning to her independent self.

Did she bite her catnapper and get tossed out, making her own way home?
Was it a prank by someone kindhearted enough to bring her home?
Was it the person in the mysterious white car?

I have no idea. I posted Squeak's return and my thanks on the neighborhood e-mail loop, wondering if the person involved had seen my original post and realized Squeak was a beloved pet, not a stray.

So that's the Tale of Squeak. I am truly grateful for this happy ending.