My daughter-in-law, Becka, a devoted classic movie buff, got the thrill of a lifetime this month when John Cleese appeared in person in Hartford at a showing of Monty Python and the Holy Grail. For a photo of Becka and John, click here. 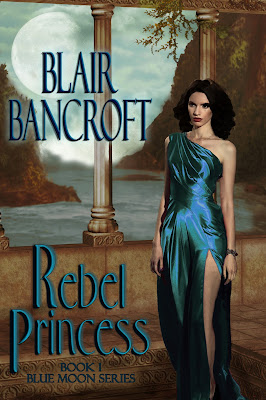 Rebel Princess, Book 1 of the Blue Moon Rising series is on sale at Amazon for 99¢ this month. A SyFy Adventure/Romance, the series features four royal children who get drawn into a rebellion against the classic Evil Empire.


Let's begin with two of the best-known historical romance authors, Jo Beverley and Mary Balogh. They have each made a highly successful career out of writing series. Mary Balogh has written several shorter series, while Jo Beverly's Company of Rogues series goes on and on, spreading from relatives and close friends to acquaintances of acquaintances, all connected, however loosely, with boys who formed a tight-knit group while still in school. War, spying, personal trials, each with a romance settled by the end of that couple's particular book. Because both Ms Balogh and Ms Beverly surround their romances with action plots and well-drawn characters, and give each book its own Happily Ever After, they provide highly satisfying reads for their devoted fans. Naturally, members of the original group of boys pop up, almost randomly, in later books. Readers do love to know that the marriages in earlier books survived, children were produced, etc., etc., even while cheering on the newest entries in the Regency and Georgian romance sweepstakes.

Grace note:  There may be a continuing theme through series of this type; for example, in Mary Balogh's Survivors' Club series, at least one couple in each romance was physically or emotionally damaged by the long war with Napoleon. But the action is always secondary to the romance, which inevitably concludes with the traditional HEA ending. I.e., characters from other books may pop up in succeeding books, but each individual book is strongly centered around just one couple.

Tasha Alexander's Lady Emily mystery series adds a new wrinkle to this concept. Each book is a separate mystery; but very early on in the series, she allows the heroine to marry. Which adds the warmth of romance to each mystery while leaving the suspense to the mystery itself. She is also very careful to keep Lady Emily to the forefront, even though her charming husband works at one of those hush-hush jobs for the government. Yes, her husband is allowed to help her on occasion, but these are Lady Emily's books, her mysteries to solve. Something female readers can appreciate.

The Lady Emily series provides a varied background for its main characters - London, France, Italy, Greece, etc. - as opposed to many series which cling to one city or a certain part of one country.

Jumping to the modern, an excellent example of a "single title" series are the Stephanie Plum novels of Janet Evanovich (now at #23). In the Evanovich books, the characters are supreme, the more incredible the better. And it helps that she's provided two such intriguing heroes that her readers are split into two camps: Is Stephanie going to end up with Joe or Ranger? (Just one more thing to keep us panting in anticipation from one book to the next.) Although Ms Evanovich has a string of continuing characters, from long-suffering parents and outrageous gramma to her astounding cohorts in the office, each book brings a new story, new murders, a new set of close calls, and even more zany characters to add to the mix. Each story is complete in one book. No one is tacking on hints about unfinished business or what may happen next. The mystery is solved, the killer(s) found, Stephanie triumphs once again - if only by accident - and we can hardly wait for what Ms Evanovich will think of next.

I'm also a great fan of Jack Higgins, James Lee Burke, and Randy Wayne White. Time and time again, they create great adventures with the same main characters and still manage to keep their stories fresh. All three have a gift for developing the villains of their tales, making them human and not just cardboard bad guys. Higgins writes Thrillers; Burke and White write mysteries. Both Burke and White are good at integrating third-person point of view into what are essentially first-person books. But again, each book is a stand-alone story. Yes, they read better if you've read the earlier books and have become familiar with the characters, but none of the authors above forget to feed in the information you need to know in order to be able to understand and enjoy whichever book you're reading. I recall one Higgins book that opened in Washington, D.C., and noting, and admiring, that every bit of vital information about the continuing characters was laid out in the first few paragraphs. Way to go, Jack!

Grace note:  It should be noted that James Lee Burke committed a cardinal sin that the authors of series are warned to avoid. After writing book after successful, highly colorful book set in the bayou country south of New Orleans, he suddenly decided to move his characters to the mountains of Colorado. Oops. I hated it. I suspect other readers did as well. We don't want authors to mess with people we have come to know and love. We don't want them to change. Oh, the hero or heroine may be allowed a different love interest, but move them a thousand miles or so to entirely different environment? That's not a fresh approach, that's desecration! I am happy to report that Dave Robicheaux has returned to New Orleans.

Lindsay Buroker (mentioned in last week's blog), who writes what might be called "Steampunk SyFy" has something in common with Jack Higgins. They both created villains so intriguing and well-defined that they simply wouldn't go way. Higgins first did it with a Nazi, whom he had to resurrect from the dead to satisfy his fans. But a Nazi-era character wouldn't translate well into modern times and keep Higgins's series going, so—to my astonishment—he seized on a rather nasty Irish villain, who wanted to blow up Downing Street, a villain who cold-bloodedly killed a girl—and turned him into the hero of one of the longest series around: Sean Dillon, whom we've all grown to know and love (!), in spite of the murkiness of his earlier days. Lindsay Buroker does the same for an assassin who has an epic battle with the hero in one of her books. Somehow this "villain" becomes the hero of her long-running series, The Emperor's Edge.

The Emperor's Edge was included in "Cliff-hanger" series because it has a strong central theme, which carries over from book to book, even though each individual adventure comes to a satisfactory close. When writing SyFy Romance, however, as Ruby Lionsdrake, Buroker writes in flat-out "single title" style. One couple, one romance, with a strong hint toward HEA at the end of each one. The same author who wrote nine books of The Emperor's Edge series with the hero and heroine doing nothing more than eyeing each other, embellishes her Mandrake Company books with enough hot sex to satisfy any enthusiast of sexy details. Yes, characters from the other books appear, but these books are a series because they share a single setting. There is no long-term goal, just adventure and sex on planets and space stations far, far away.

Other authors who do a great job of writing "single title" stories while sticking to just one locale are: Julie Hyzy (whose heroine is the chief cook in the White House), Catherine Lloyd (who writes mysteries set in and around an English Regency-era village), and Linda Castillo (who writes modern mysteries set in an Amish community). Castillo is another example of an author who allows her heroine to settle down with one man (several books into the series) and still manages to write marvelous stories, each standing on its own merit.

Summary: There is a surprising amount of flexibility in series which keep the same characters (and often the same locale). The creation of new situations, new adventures keeps things fresh, as does the addition of new characters. Well-drawn villains - not just evil stick figures - also add to a story. Keep the continuing characters humming along, doing what they do best; don't make any drastic changes in personnel or setting unless you want to incite your readers' ire. But if you find you've created a character who seizes the bit and runs with it, then maybe you'd better keep that character around, make him/her a permanent member of the cast. And above all, if your series has an overall theme - a goal that remains unsolved, whether it be the overthrow of an empire or the finalization of a romance, be sure each of your books has a satisfactory ending of the plot-of-the-moment.

As I looked over my list of series I have read and loved, I was surprised how many were of the "single title" variety. (Clearly, I am not a fan of series that focus so heavily on one main theme that no book seems finished until the final one.) Next week, I'll look at more favorites of mine - series that have a defined overall theme but still manage to produce satisfactory endings to each individual book.