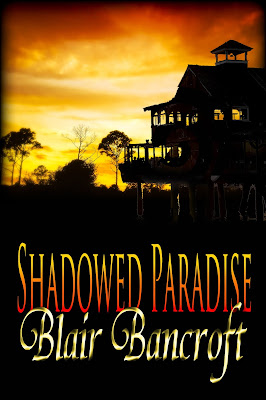 This week's Hurricane Hermine, Florida's first hurricane in eleven years, reminded me of the opening chapter of my Shadowed Paradise, and that it was an excellent example of how to take a true incident and incorporate it into a work of fiction. Shadowed Paradise is chockfull of truths adapted to fiction. This week's Mosaic Moments features one of them.

Way back - sometime in the late 80s or early 90s - when I was living in Venice, Florida, we were hit by a "no name" storm that dumped 29" of water over three days, isolating many homes and washing out the center of a bridge less than two miles from my house. When I heard the story on the news, I jumped in my car and went to take a look. I even walked part way out on the bridge to get a good view of the gap. The night before, in a blinding rainstorm, a nurse on her way home from her shift at the hospital had driven into the c. 18-24" gap in the in the center of the bridge cut by the rushing waters of Alligator Creek. Fortunately, those were the early days of cell phones (which I presume is what she used to call for help), and she was promptly rescued by local fire and police.  That, of course, is the background to Chapter 1 of Shadowed Paradise. As you will see in the Author's Note, I also used a number of other actual incidents when writing my first Romantic Suspense. Below, please find that Note plus Chapter 1 of Shadowed Paradise.

A surprising amount of this book is true. After all, how could anyone make up such a bizarre incident as a snake climbing a typing stand after a terrified tree frog? It happened to me while I was writing this book. The bridge washout, the car trapped in the gap, occurred about a mile and a half from my house. Spiders the size of saucers, alligator attacks, jungle rivers the color of strong tea, a “city” with a thousand roads to nowhere—they all exist on Florida’s gulf coast. A great deal more of the story, including the serial killings, are based on fact, but, beyond that, I leave it to the reader to guess where truth ends and fiction begins.

Grace Note: The lesson from today's Mosaic Moments: Look around you. It's amazing how many real-life events you can adapt for use in your books.

SAD NOTE: Below is a link to the explosion of the Space X rocket that was scheduled for launch on Saturday, September 3. The oxygen tank at the top blew up, followed by the explosion of the rocket and the payload (a satellite that would have brought the Internet to much of Africa). A $250,000,000 loss. For video of the explosion, click here.


For a brochure for Grace's editing service, Best Foot Forward, click here.
Posted by Grace at 11:07 AM