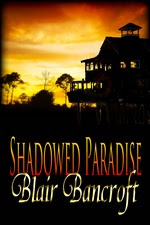 Over the years I've become so branded as a Regency author that my contemporary Mystery and Suspense books tend to go unnoticed. Therefore, every once in a while I like to feature one or two. This week it's my Romantic Suspense, Shadowed Paradise, first published somewhere around 2001. It's a favorite of mine because so much of the book is based on fact, not fiction. Below please find the blurb from my website. Shadowed Paradise is available from Amazon, Smashwords, B&N, and most other online vendors.


When Claire Langdon's affluent, near-fairytale life in New York is shattered by scandal, she and her eight-year-old son Jamie take refuge with her grandmother in Florida. Once a bright, confident young woman, Claire has been so badly hurt that when she stumbles onto a genuine downhome hero, learning to trust, to love again, seem beyond her reach. She is also forced to deal with the discovery that there are more serious dangers in Florida than alligators, snakes, spiders, and macho males. Like a serial killer, with her name on his list.

Brad Blue is the son of a Russian defector (from Cold War days); his mother, the daughter of one of Florida's wealthiest cattle barons. (And, yes, Florida is the largest cattle-producing state east of the Mississippi.) Still under forty, Brad is retired from one of Uncle Sam's many secretive "alphabet" agencies. He's tough and lonely and more than ready to settle down to family life, but convincing Claire Langdon to marry him is one of his most difficult assignments. Almost as difficult as discovering the identity of the killer who is stalking female real estate agents in Calusa County, Florida.

From the moment Claire and Brad meet in the midst of a flooded bridge, cultural shock wars with romantic attraction. On top of that, they both have pasts that don't bear close scrutiny. But when Brad offers Claire the job of "sitting" one of his model homes out back of beyond, she accepts. Which is just fine with the killer.

The killer plays a prominent, if anonymous, role throughout the book, gloating over his kills, attempting to justify them. And finally meeting Claire, face to face.

I once heard a so-called "plotter" tell a group of authors that, oh horrors, "pantsers" (i.e., "mist-ers" like me) actually have to go back and ADD things to their manuscripts! Uh, really? You mean pantsers get it perfect the first time? Sorry, I don't think so. And as a "mist-er," I don't expect to get it perfect the first time. I just want to get the feel of the book, get to know my characters, gather the plot around me as I go, etc., etc. Imagine how thrilled I was at my very first RWA conference  (c. 1996?) to hear Tami Hoag put a name to the way I write: Layering. That's what she called the way she writes, and I recognized the method instantly. We mist-ers do not go back and add things we "forgot." We go back and add more details, more color; clarify motives; paint a more brilliant picture, if you will. (Sometimes "color" means changing only a single word to something better.) All things we couldn't possibly do perfectly the first time around when we're forging ahead, eager to discover what happens next, snapping out dialogue, or working on getting to know these people we've created. Our books are an adventure, an explosion of continuous creativity, flexible right down to the moment we hit "Submit."

I mentioned "layering" in last week's blog, but as I edited a chapter of Tangled Destinies this week, I realized it was an extreme example of layering and would hopefully help clarify what I mean by "layering." I am pasting a portion of the chapter below with the newest "layer" in red. The chapter had already been edited once, directly after it was written. This version is a second layering.

By the time I recovered enough to struggle to my feet, the Earl of Thornbury had crossed the few feet of well-scythed grass, and I found myself gazing at his broad chest, a scant two feet away. Far too close to execute anything more an inclined head and a slight bending of my shaking knees. The hunter had found his prey. Alone, encased in what seemed like miles of impenetrable boxwood, and far from shouting distance of the house. I avoided looking at him, but I could easily picture his expression. A mix of sly satisfaction and vulgar intent. I was to be his amusement for the morning.

Slow stalking, evidently, instead of the quick pounce, for he waved me back to the marble bench and remained looking down at me, his tall form casting a long shadow over both bench and grass. I shivered, anticipating the worst . . . surprised by the reasonableness of his tone when he spoke.

“Most women with your appearance and genteel birth,” he offered, “would have used their assets to snabble a husband of wealth and title long since. May I ask why you have not done so?”

A bark of laughter pierced the cool stillness in the center of the maze. “A hit, a hit, a palpable hit,” the earl conceded. “And yet, if you shun marriage, I cannot help but wonder why you have not considered the opportunity to shine as one of London’s brightest courtesans. Believe me, Miss Scarlett, properly dressed, you would outshine them all.”

In icy tones, and with as much dignity as I could muster, I replied, “My lord, I assure you I have been offered opportunities for both marriage and . . . the other. I am content to remain as I am.” A towering falsehood, but pride demanded my response.

“You prefer the lure of Lesbos?”

I gasped, genuinely shocked, even as I was forced to admit it was a perfectly reasonable question. Except gentlemen simply did not speak of such things to ladies.

They do to women passing themselves off as nurses and calling themselves Nell Scarlett. To women who look like you yet seem to have no interest in men.

I lifted my head, looked him in the eye. “Though it is none of your business, my lord, I lost someone in the war. And now, if you will excuse me . . .” I bounded to my feet, slipped past him, and headed for the path through the maze at a pace so brisk I was almost running. And naturally, as upset as I was, I was lost by the third turning, rounding a corner to find nothing but impenetrable hedge in front of me. Dead end. I paused, more breathless from panic than from the distance I’d run. Boxwood branches poked me in the back, loomed above me on each side. No way to go but back the way I’d come. Back to where the earl was undoubtedly lurking . . . Waiting for the mouse to venture out of its hole.

I tiptoed, listening for the slightest sound of someone else moving through the maze. Nothing. Yet he was there, I knew he was. Hunting. Enjoying every moment of it. Long familiar with every inch of the maze, Thornbury was poised to pounce on the foolish girl who could not seem to escape an outward façade that attracted men like flies to honey. The girl who knew too much.

A bolt of a different kind of fear shot through me. I slid to a halt, shaken to my core. Perhaps this hunt was not what I thought. Not the earl indulging himself in a game of cat and mouse with his nephew’s nurse, but something more sinister . . .

I clamped a hand over my mouth to stifle a gasp. My stomach roiled.

Steady, steady. Panic will do you no good.

Ha! All the logic in the world wasn’t going to get me out of this maze.

Ahead of me was an intersection with two choices—right or left. I strained to hear any telltale sign of the earl’s passing—leaves rustling, the snap of a twig. Nothing. I chose the left, moving stealthily toward the next corner, a good ten feet away. With an unsettling mix of wariness and hope, I peeked around the corner. . . and saw nothing but ten-foot walls of boxwood, no matter which direction I looked. No-o-o! Heart pounding, I dashed back the way I’d come, rounded yet another corner, kept on running. Right, left, left. I was panting, my breathing harsh, my throat parched, but surely I must be on the correct path at last. No more dead ends. Another turn, and I ran headlong into something unyielding.

Not as prickly as boxwood.

The Earl of Thornbury’s chest. He laughed, gripped me tight, and kissed me soundly.

I whimpered. Though, to my horror, not from the revulsion I’d felt when Geoff kissed me. My panic was swept away in seconds as the warmth of his lips, the solidity of the body pressed to mine seemed to offer shelter instead of ravishment. He even smelled wonderful, an intriguing mix of all male and a fragrance that might have lingered from his shaving lather . . .

Suddenly appalled by what I could only term my feminine weakness—an emotion I thought I had routed out of my life after losing Brant—I pulled away. Surprisingly easily, for Thornbury’s grip had never been ruthless. I would have no marks like the ones Geoff left on my arms, the ones everyone attributed to the carriage accident.

Eyes locked, we stared at each other for a moment before he grasped me firmly by the hand and led me out of the maze. At the entrance he paused, looking back toward Winterbourne. “A bargain, Nell,” he said. “I will endeavor to behave myself if you will agree to keep our secret.”

And so on to the end of the chapter.

Hopefully, this sample is enough to demonstrate what I mean by "layering." Ideally, when I go back for the next edit, I will find only a bit of tweaking needed here and there, but who knows? If an author is always thinking, thinking, thinking, and doesn't allow herself/himself to become complacent, there are always things that leap at you that can be better. But don't get hung up on "tweaking" forever. The third or fourth time through should be enough. If the opportunity arises, put the book aside, come back to it in six months. A whole new world will open. That's what's happening with Sorcerer's Bride (Book 2 of the Blue Moon Rising series) at the moment. I put it aside when I moved last year and am just taking it out for a final edit. Oh wow! A lot of new layers - some necessitated by events in Book 3, The Bastard Prince, which I just finished this spring. And some new details that simply insisted on coming to light with this new read-through.

To an out-of-the-mist author writing is never static. Outlines are anathema, the death knell to creativity. We only love writing when we're "winging" it. If asked to write a synopsis ahead of time, it's forgetaboutit. No way, no how. I can't do that. I hasten to add what I've said before, "To each his own." Each author has to find his/her own path. My crusade is make sure that those relatively new to writing know that approaching a book via a 20-page outline is not the only writing technique out there.