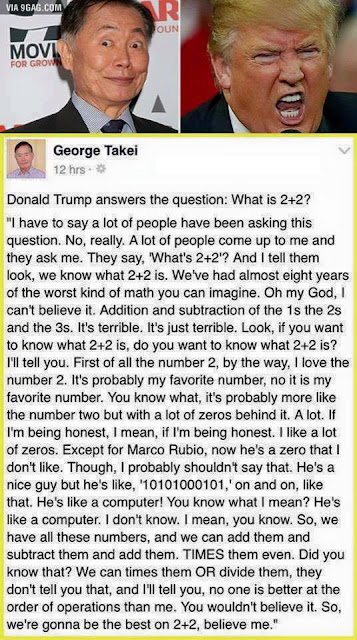 Evidently, this marvelous imitation of Donald Trump's BS was written by George Takei, and it's right on. It is beyond my comprehension how so many Americans can be taken in by this kind of #%$@.


Grace Note: I saw something that made my heart sing last night. I was driving on an overpass over I-4 on my way to the grandgirls' soccer game when my attention was caught by something truly unusual. Please note it was rush hour on a Friday night. And there was a perfectly ordinary looking woman of middle age standing on the overpass. Beside her, draped over the high fence and inward-turned barbed wire was a bedsheet with large hand-painted letters. Letters big enough to be read by drivers zipping by beneath. I had to read them backwards, but I'm pretty sure they said, STOP TRUMP!

Her action gave me hope that the average American is beginning to wake up to the threat of this new kind of fascism.  But that this woman, all alone, cared enough to make such an effort . . . I could only hope that her protest - and mine - are multiplied by the thousands, the millions, proving that thinking citizens will finally stand up and say - before it is too late - NO, THIS IS NOT AMERICA, THIS IS NOT US. Our country was founded on religious freedom, not religious hate. How can we forget: "Give us your tired, your poor, your struggling masses yearning to breathe free."

Think about your ancestors. Irish, Italian, Chinese, Catholic, Buddhist, Muslim, Jew. Trump would never have let them off the boat. He probably would have set a foot-wide chain across the mouth of New York Harbor. Maybe set out a few mines. Trump is appealing to a basic human fear: suspicion of anything, anyone "different." Hitler parlayed that into the Holocaust. Don't let it happen here.

On a lighter note:

Orlando's professional soccer team started its second season last Sunday afternoon. Their only goal was disqualified, and they were down 2-0 throughout most of the game. Fans were leaving, the clock into the last of four added minutes at the end of the game when . . . a miracle occurred. Mike Bianchi, sports columnist for The Orlando Sentinel, wrote it up so well that I just had to pass it along. (As a writer, I appreciate any writer who does his/her job well!)

The mayor had already left the stadium.
That's right, Orlando Mayor Buddy Dyer had just been interviewed by a local TV station about Orlando City's, ahem, season-opening loss.
The TV reporter and the mayor both thought it was over.
So did you.
So did I.
So did the 60,000 or so fans who filled the Citrus Bowl.
So did everybody.
Except the Orlando City Lions.
Or should we call them the Orlando Gritty Lions?
Unbelievably, inconceivably, amazingly and hair-raisingly, they tied the game. And won the day.
Orlando City 2, Real Salt Lake, 2.
You thought last year's 1-1 tie in Orlando City's inaugural game was thrilling after Kaká scored on a free kick in the 91st minute?
This one was 10 times more historically and euphorically thrilling.
You've heard of the Miracle on Ice" This was the Miracle Done Twice. Two goals—one by Cyle Larin and the qualizer on the ensuing kickoff by Adrian Winter—in the 94th and final minute of stoppage time. This was like seeing back-to-back buzzer beaters.
The Immaculate Deflections.
"That's what you see in video games," Larin said. "You don't see that in actual soccer, but we brought it to real life."
Said Real Salt Lake coach Jeff Cassar:  "I don't recall ever seeing anything like that and I hope I never do again."
. . . .  (several paragraphs omitted)
When the tying goal was scored, fans who had begun to funnel out of the Citrus Bowl, turned around and made a mad rush back into the stadium where they chanted and cheered, danced and sang, waved flags and banged drums for 30 minutes after the game.
. . . . (The article continues with two more columns of general background on Orlando City's immense fan success here in Orlando.)

Grace note:  Input from my daughter's Argentinian in-laws—plus watching the grandgirls play soccer year after year—has not exactly made me a soccer expert, but at least I have learned a bit about the game. So I watched the whole match on TV last Sunday, and there was one thing Bianchi did not state in so many words but which the announcers kept repeating (nearly shouting) at the time. The Lions scored two goals in 30 seconds! I too had given up and gone out to water my plants but was lucky enough to come back just in time to see both goals. As everyone keeps saying, this was a tie that came off as a win. Wow!

Update:  The second game of the season on Friday night was a 1-1 tie, but was pronounced nowhere near as thrilling as Sunday's dramatic comeback.

~ * ~
I will likely get back to Writing & Editing topics next week. Probably sounding off on the subject of "tags."