We've all come to expect such perfection of UPS. Well, alas, I have evidence it isn't always so. Below find pictures of the Etagère I ordered from Target, a perfect way, I thought, to display family photos and special knick-knacks. 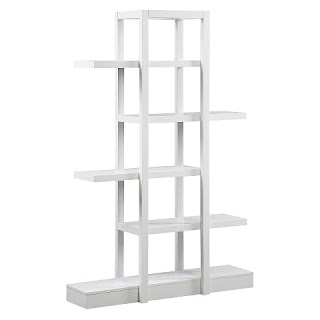 When UPS knocked on my door, I was so excited - until I tried to lift one of the two boxes and had to call for help. When my daughter dragged the boxes inside, she discovered they were fastened together by bubblewrap, which seemed a bit odd. The next day when I removed the wrap, all ready to assemble my lovely new furniture, I discovered with horror that the two boxes were meant to be one. My beautiful etagère had snapped in half somewhere along the way. (Fell off the truck?) Below are photos of what actually arrived at my house. 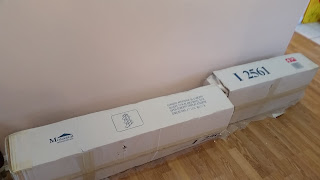 In close-up, you can see where the wood, as well as the Styrofoam, has snapped. Aargh! I SO wanted to get the boxes of framed photos off the living room floor. 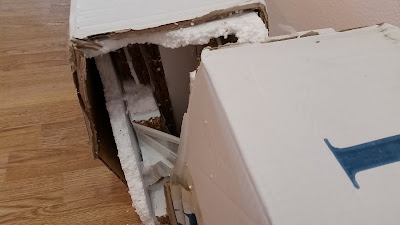 I'd like to add a bit more about last week's #4, Introductory Phrases.  I noticed in my own work this week that I put a comma after opening words, such as "Fortunately," "unfortunately," and "However," even though a comma after "But" and "So" are no-nos. In attempting to figure out why this is so, I realized these words are more like interjections than introductory phrases and are treated as such. But again, this is a gray area. How do you distinguish between a one-word introductory phrase and an interjection? This is one of copyediting's many challenges. In the end, I believe, each author must decide what feels right for his/her personal style.  I would never correct an author who preferred to leave the comma out after the above words unless I felt the drama of the sentence needed a more obvious pause. For myself, however, I will continue to use the comma.

1.  Introductory words requiring commas, as named by The Chicago Manual of Style
Yes, No, Well, Well then.

Examples:
Yes, I am going home tomorrow.
No, you may not have any more candy.
Well, that's just plain stupid!

2.  Interjections
Interjections are similar to Direct Address. They require commas on both side.

Examples:
This, indeed, is what the book is all about.
The only conclusion, therefore, is that the man is mad.
I will, however, take the exam next year.

3.  Restrictive & Nonrestrictive Phrases
If the descriptive phrase is essential to the meaning of the sentence, you do not use commas.

Examples from CMS:
The woman wearing the red coat is my sister. (Restrictive)
My sister, wearing a red coat, set off for the city. (Nonrestrictive - you could eliminate the descriptive clause and it would not change the meaning of the sentence.)

Examples from CMS:
We will agree to the proposal if you accept our conditions.
Paul was astonished when he heard the news.

She ought to be promoted, if you want my opinion.
At last she arrived, when the food was cold.

I find the CMS's last example a bit harder to understand. I personally think I might omit the comma, as to me the second clause seems essential to the sense of the sentence. Another example of a copyediting challenge. I would call this one a "your choice."


He didn't run, because he was afraid to move.

Examples from CMS.
The report that the committee submitted was well documented.
That is the woman who mistook my coat for hers.

The report, which was well documented, was submitted to the committee.The book, which I finished last night, is due back tomorrow.

More on "that" and "which" next time.