Last night's TV news announced that Orlando hosted 62,000,000 visitors in 2014, making it the most visited place in the United States. I've long called it "the Resort Capital of the World," and I guess this shows I'm not wrong. International Drive - known locally as I-Drive - is doing its best to rival Disney and Universal, topping off the fun soon by debuting the Orlando Eye, which was used as a training site this week for a special squad of rescue/firefighters being put together to deal with the very special demands of features like the Eye and our many towering rollercoasters. (Twelve people had to rescued from a coaster at Universal just last week.)

Although I am immensely grateful to all my Regency readers out there, regular readers of my blog know that every once in a while I like to feature my non-Regency books, which tend to be neglected by the majority of my fans. Sigh. (Hmm - I wonder if Georgette Heyer felt the same way about her mysteries . . .)

Today I'm featuring what I call my Golden Beach books, books set in that wonderful Gulf Coast community where I lived for 25 years, the town whose true name remains secret as the population triples every winter with the influx of snowbirds, and we really don't need any more people discovering this treasure, thank you very much. But I really, really hope you will enjoy "Golden Beach" vicariously through the books below. And yes, all geographical features are true (though the names are not), as well as the culture, and a remarkable amount of the action, particularly in Shadowed Paradise, which includes a number of actual events. 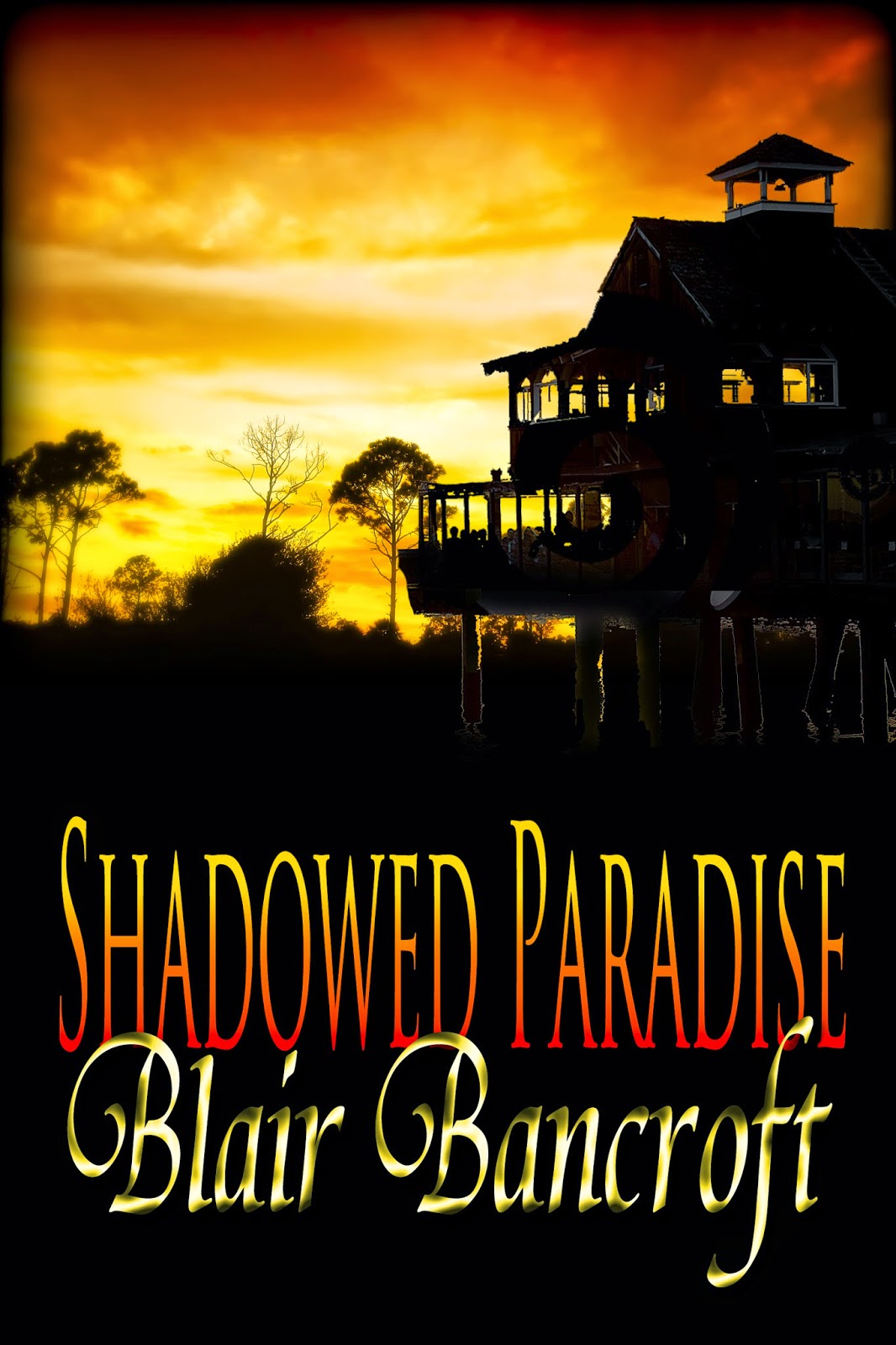 Blair Note: In a manner similar to Tarleton's Wife and The Sometime Bride, this is a book I wrote before I learned the so-called "rules" of writing, making it my personal favorite among my non-Regency books. It's natural and heart-felt. As well as truly scary and suspenseful.

When Claire Langdon, a product of Ivy League New England, meets a long-haired Florida cracker in a blue pickup in the middle of a flooded bridge, the attraction is instantaneous and powerful, the cultural shock resounding. Claire finds herself coping with a lover whose veneer of civilization is about as thin as that surrounding the Florida wilderness. She must also deal with her new job as a salesperson for a luxury housing development, an unwelcome visitor from her past, her new lover's ex-wife, and her lover's ex-lover. Not to mention a stalker, who may or may not be a serial killer. 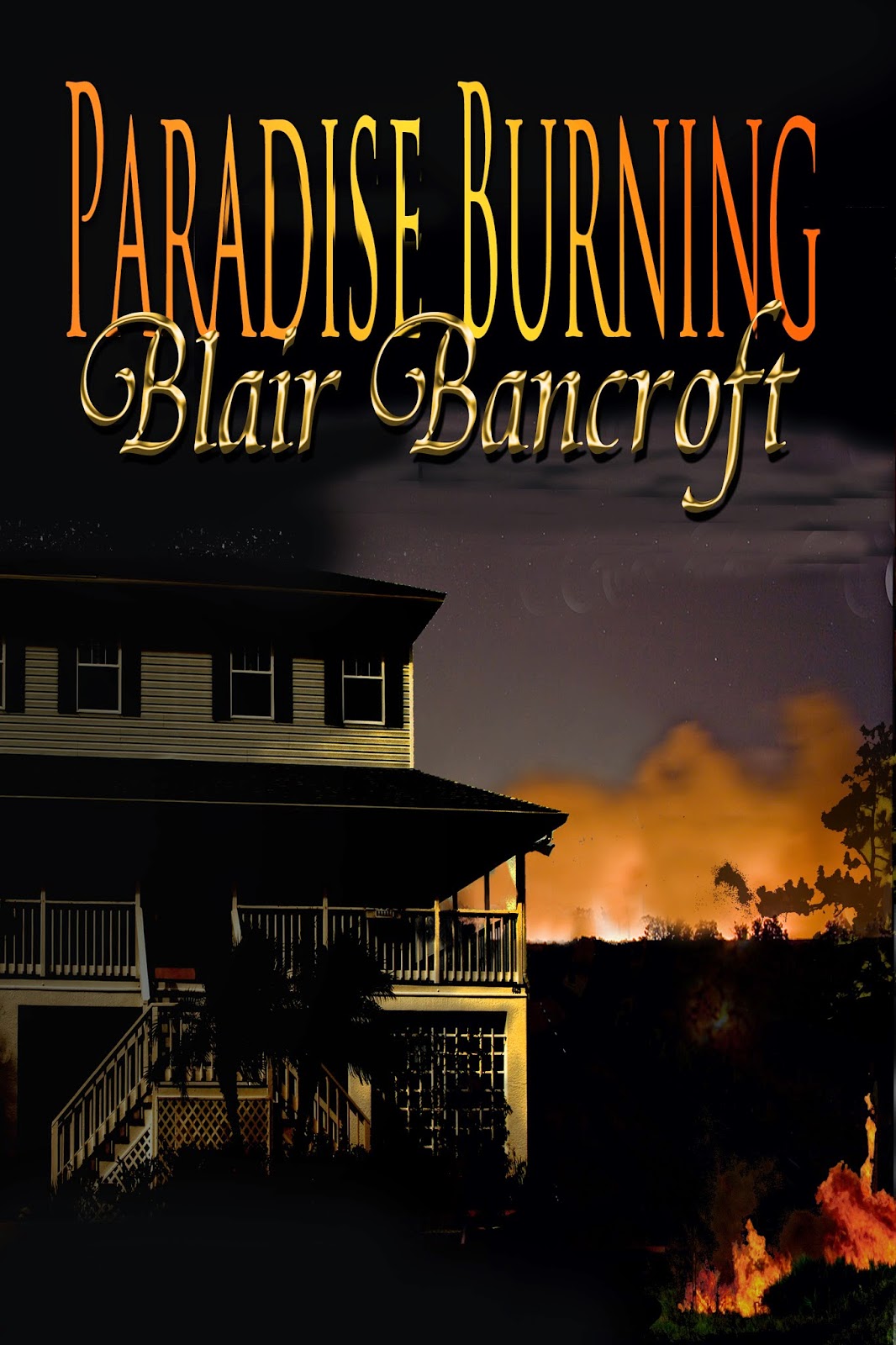 Paradise Burning is a sequel to Shadowed Paradise and includes true incidents, although oddly enough the huge wildfire described in the book did not happen until several years after the book was finished.

Amanda Armitage plays a vital role in her family's international investigations agency. Great job, great salary, great heartache, as she lives her life, eyes on the computer screen, fingers on the keyboard. When she loses an agent, a friend, on her watch, she is forced to examine the joylessness of her narrow existence.

Acknowledging her burnout, Mandy's resistance is minimal when asked to spend the winter season in Florida, working for Peter Pennington, who is writing a book about international trafficking in women and children. The same trafficking that just got her friend killed. There is, however, a slight glitch. Peter Pennington is the husband she hasn't seen in five years.

As Mandy and Peter juggle a rekindling romance with the dangers of international trafficking, the girl once known as Mandy Mouse metamorphoses into a dynamic, independent woman. Perhaps too much so, as the world around them literally goes up in flames, and Mandy, discovering how easily black and white can dissolve into shades of gray, is forced to make the second most difficult decision of her life. 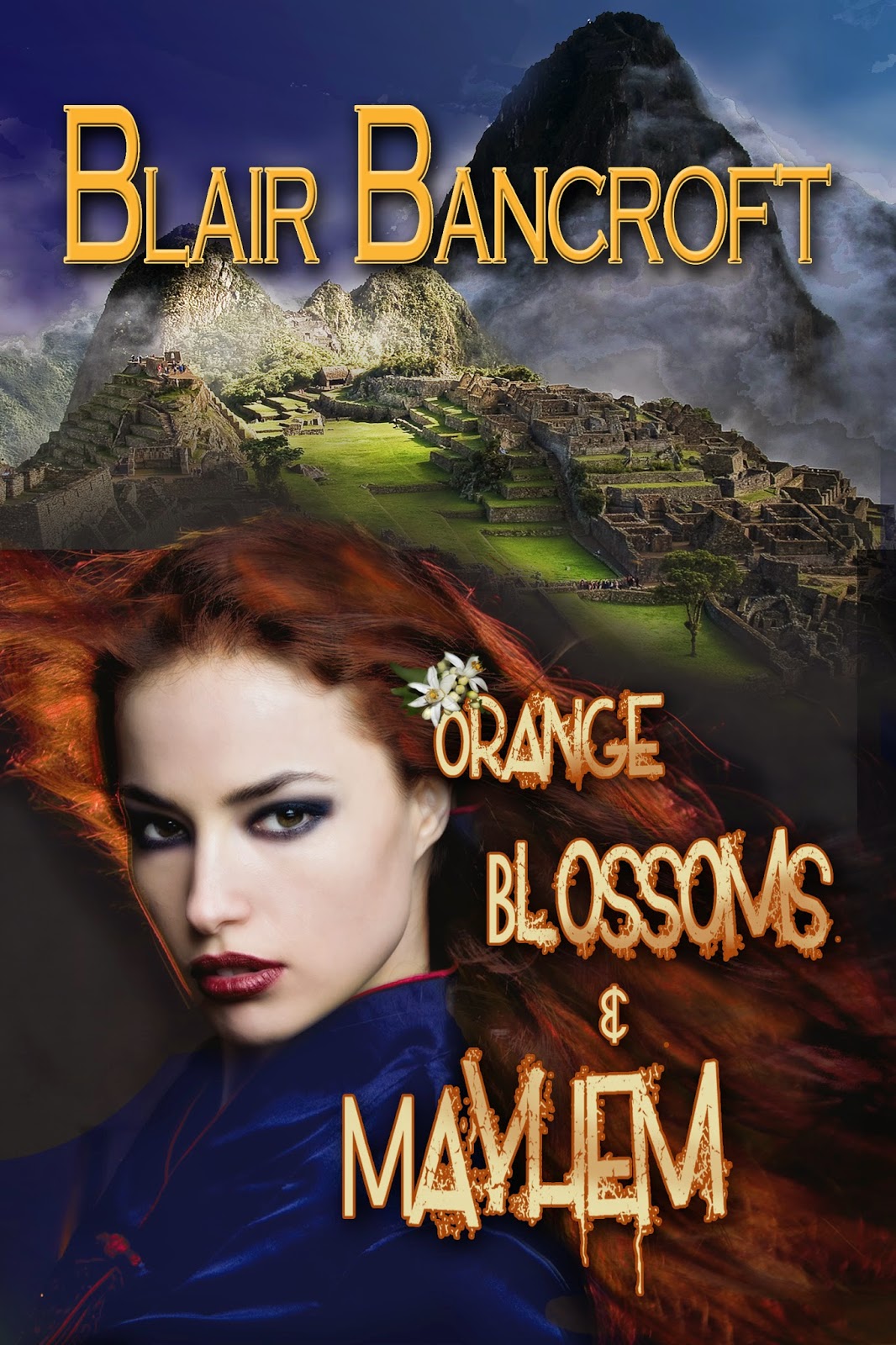 Blair Note:  This was my first attempt at writing in first person, and I loved it, finding it so much easier to be clever and amusing, as well as dramatic.

Want to get married in a hot air balloon? Have the bride step out of a Fabergé egg? Just call Fantascapes, the Halliday family business (ironically based in a sleepy Florida resort and retirement community). Fantascapes is also the right number for hiking the Inca Trail, a chalet in Switzerland, or a luxury journey to Angkor Wat. 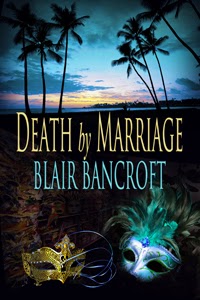 A personal disaster in New York City sends promising clothing designer Gwyn Halliday fleeing home to the sleepy Gulf Coast resort and retirement community of Golden Beach, Florida, where she turns her talents to designing costumes. Five years later, her shop, DreamWear - Costumes and Creations, is a success, providing rental costumes to native Floridians, local retirees, and to the snowbirds and tourists who flock to the area each winter. Gwyn has come to terms with being an exotic blossom in a sea of seniors when one of her customers is killed (wearing DreamWear's best Santa suit), and she suspects the so-called "boating accident" was murder.

In rapid succession Gwyn meets the new Chief of Police (from landlocked Nebraska), runs into a former crush (now suffering from PTSD), and begins to suspect an elderly senior is being targeted by a series of scams (one possibly lethal). And then her brother becomes a suspect. Gwyn is well aware she should stick to costumes, but what's a girl to do when things get personal?

Special Note:  I'm considering having Gwyn and Laine team up for a sequel. Haven't made up my mind about that yet. 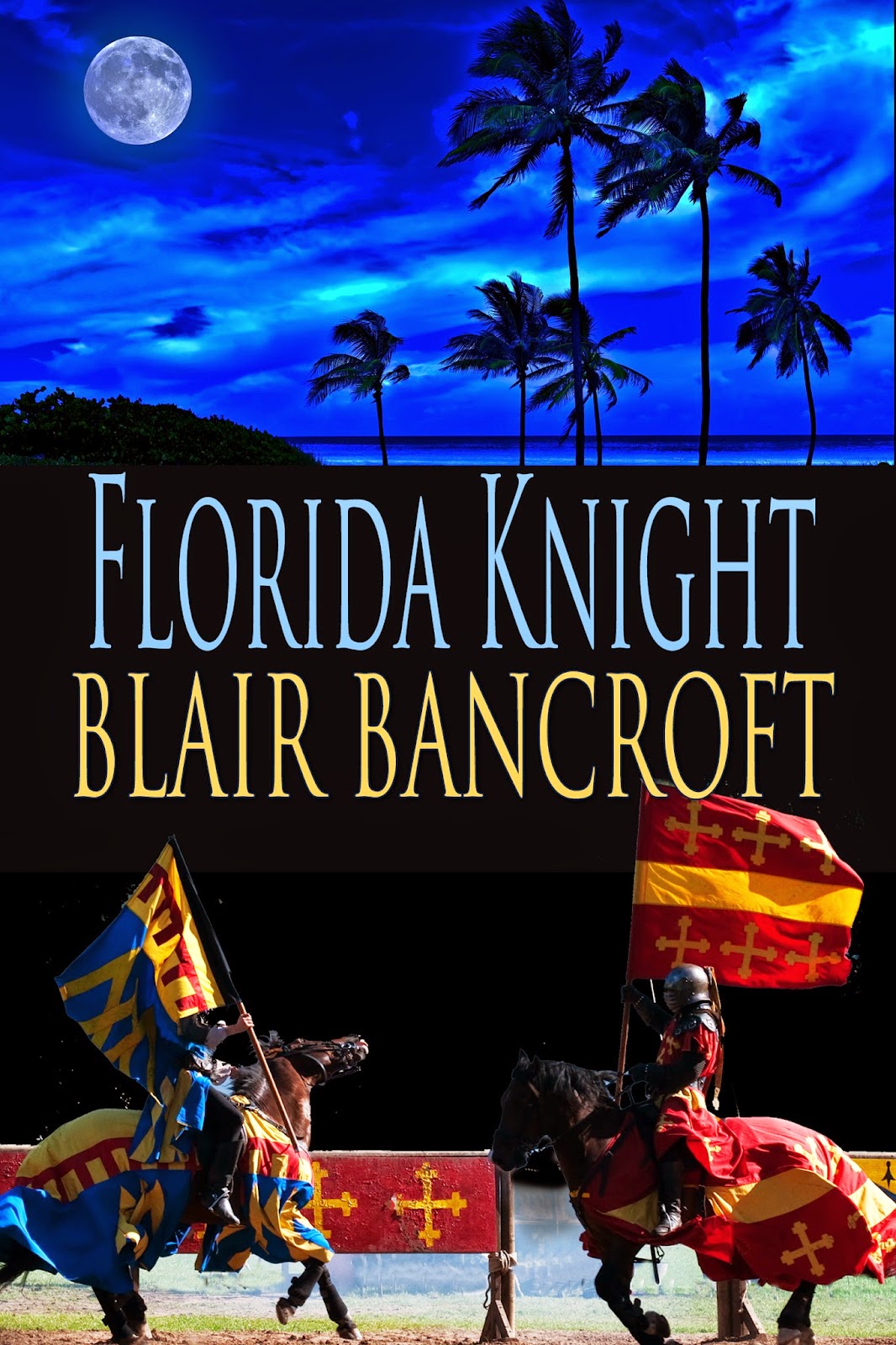 Florida Knight is a book close to my heart, as I lived it for a number of years as a member of Trident, the Florida chapter of the Society for Creative Anachronisms.

When Michael Turco's brother is injured in a tournament at a Medieval Fair, the Florida Highway Patrol lieutenant suspects it wasn't an accident and begins his own personal investigation. Which causes him considerable anguish when he has to enlist the aid of Kate Knight, who is his entree into the Lords and Ladies of Chivalry (LALOC), a Medieval re-enactment group. Kate, who has been fighting her way out of abuse for years, is equally appalled. Michael will pose as her boyfriend, and she, who has been celibate for years, will be forced to share a postage-stamp-size tent with him nearly every weekend until the mystery of a series of disasters at Medieval Fairs and LALOC events is solved.

Michael has his own problems, finding the adjustment to LALOC's Medieval lifestyle, including costumes he can't believe he's wearing - and bowing to a chair? - a severe trial. He must also cope with a multitude of quirky personalities among Medieval enthusiasts who take themselves very seriously indeed. Plus a rash of new, ever more serious, "accidents." And then there's Kate, who seems to be mellowing until she gets a look at him in full FHP uniform.

Thanks for taking a look at my Golden Beach books. Here's a hint: the real thing is not far south of Sarasota. And, no, it really doesn't have as many dire happenings as depicted in these books. It is truly one of this earth's most special places.