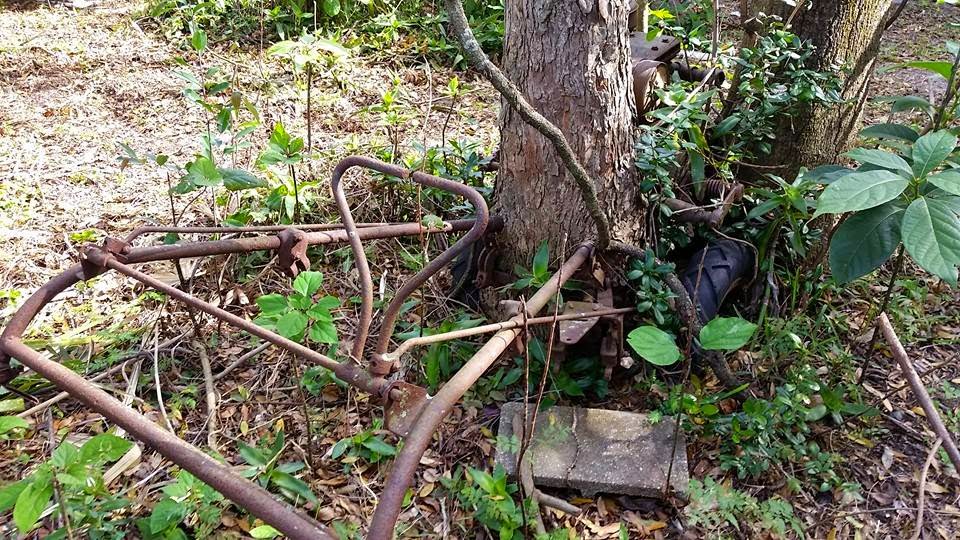 My daughter and her husband were looking at possible houses for rehab and found this amazing sight - a tree that simply grew around the lawn-mower left beside it. They did not buy the house, but if they had, she said they would have cleared the ground, mulched it, and left it as a conversation piece.


Setting.
A setting needs clarity and color. Otherwise, the characters are talking heads set against a blank canvas, like a child's stick figures. Readers also want to get a feel for date and location. Sometimes you can identify a scene by simply adding a Date & Location line at the top of your scene. But don't forget readers will feel more at ease if you paint the backdrop for them. Are your characters in the city, the suburbs, or the country? A mansion, a condo, or office? If you didn't use a Date & Location line, can the reader immediately tell what era it is? Contemporary, Victorian, Medieval, Fantasy World, a Galaxy Far, Far Away? Can readers tell if your characters are on a farm, in a tavern, war zone, a spaceship? If not, you need to add the necessary words of identification and "paint" a background that enhances the action and dialogue.

Characters.
Although Conflict is an essential element in fiction, creating interesting and believable characters with whom the reader can empathize is probably the single most important aspect of your book. If you have great characters, you can usually get away with a sketchy plot! But the best plot in the world will fail if your main characters are shallow, cardboard, uninteresting, or not properly identified (a frequent failing, particularly with secondary characters). Readers need some idea of who your characters are—at least a hint of their place in the world, and hopefully some kind of physical description—before they can be expected to develop an interest in the people you've created. You—supposedly—know your characters. Readers do not. It is your job to reveal your characters to your readers so they can understand them as well as you do. They can't do that if you leave the details in your head.

Readers want your hero and heroine to be likable. The h/h can have flaws, but readers must be able to believe those flaws will be redeemed. (Or in some cases, minor flaws merely make a character more appealing. That's a choice that is up to you. Just don't make your heroine a bitch and keep her that way. Nor your hero a permanent grouch who enjoys kicking puppies and small children! Yes, he is allowed to have a meltdown at some point, but he cannot stay a bad guy. At least not in romantic fiction.)

Grace Note:  I recently abandoned a book (and a whole series) because the main character was continually snarky. Some readers may think it's "honest." I wouldn't go near a person like that with a ten-foot pole, and I certainly wouldn't share my life with that person through reading about him/her. And I suspect many others feel the same way.

Characters are the backbone of a book, the element that makes a book come alive. An author should give them the physical description, background, and voice they deserve. Try to get to know your two main characters before you begin a book, but don't be surprised if they metamorphose into independent characters with a will of their own. Give them their heads. Spontaneity usually adds sparkle to a book.

As an example of the above, I first heard about the phenomenon of characters taking over a book from my mother back in the days when she was writing romances for Modern Romance magazine.  She sat down at the table for supper one night and told us how her hero and a rival had taken on a will of their own. "They weren't supposed to end up in the lake," she said, shaking her head. "It just happened." [In this particular serial story the readers were supposed to decide which man got the girl. Instead, it was which one drowned!]

So give your characters the freedom to be themselves. If you have written a good book, they have undoubtedly grown and developed over the chapters you've written. They really aren't those sketchy characters you started with. Don't be afraid to allow these stronger, wiser, happier, sadder, exhausted, frustrated, exuberant people to take the bit in their teeth and charge off into the sunset. (I'll never forget how surprised I was when one of my heroines allowed the villain and his lover to drive away in her $100,000+ mobile home!) And, no, I won't mention which Golden Beach book that is in as it will give away the ending.)

Secondary Characters.
Secondary characters are also important. They should add depth and color without being so prominent they detract from the hero and heroine. In the case of important secondary characters, be sure to include some kind of identification, a brief physical description, and at least a hint of their personality.

One of the most common beginner mistakes is allowing secondary characters to take over the story, overshadowing the hero and heroine. Do. Not. Do. This. For example, I recently read a book where the hero had more scenes with a secondary female than he did with the heroine - to the point their interaction was not only detracting from the story but adding a rather icky sub-plot. I also recall reading a contest entry where the whole first chapter featured the heroine and a male friend at a ball, with no hint of either hero or a plot. Do. Not. Do. This.  Even in tales of suspense, readers want to see the hero and heroine interact with each other, and not constantly sidetracked into dealing with other people. Yes, of course, the h/h must talk to others, but do not let these scenes dominate your book and detract from the romance.

Characters in a series.
Your characters - hero, heroine, secondary - must be reintroduced with each new book. Write the book as if, say, Book 5 is the first book in the series the reader has read. And, besides, most people are so busy their memories are short. The majority of people who did read Books 1-4 have probably forgotten who some of the characters are and what they did in previous books. I recently had the uncomfortable experience of jumping into a series where the author did not make any effort to identify characters from past books. A character was suddenly introduced as "Emma's friend." And there I was, paging back and back, trying to find Emma - who was not there. Evidently, I was magically supposed to recognize her from a book I hadn't read. This practice continued throughout the book, causing untold confusion. If I had not been obligated to finish this book, it would have been a wall-banger by Chapter 2.


Special Note on Character.
Lack of identification and description are the cardinal sins when introducing a character. In contests I've judged or manuscripts I've edited, even some main characters simply appear, engage in dialogue, and disappear. We have no idea who these people are, where they came from, or what makes them tick (i.e., no introspection - no looking inside the main characters' heads). Believe me, even minor characters need some sort of introduction. Simple examples: Ellie, Marybeth's maid; John, who played high school football with Eric. Identification is all important! Otherwise, readers are left grinding their teeth. And soon become disinterested. As I did with the book in the paragraph above.

Summary on Character.
Readers want juicy details on their heroes and heroines, past and present. They want to see them against a well-drawn background. They want to see inside their heads, experience their emotions as well as their action and dialogue. To repeat a phrase I've offered a countless number of times before. We (readers) want to view the story through the hero's and heroine's eyes. We want you to let us see what they see, hear what they hear, feel what they feel. We also want to know who these people are - and that requires a bit of their past as well as letting us know their characters through their actions and dialogue. Whatever you do, do not settle for reams of dialogue set against a blank canvas (i.e., narration with no setting, no character descriptions, no identifications). Give your characters depth. Make them come alive. Make us care.