Incredible as it may seem, Tuesday's Orlando Sentinel announced that the quarterback for the University of Florida has been suspended from the team after accusations of rape. No, this is not the same Florida quarterback previously mentioned. This is another one. The reaction, however, has been vastly different from the reaction to the accusation against Jameis Winston. Evidently universities are finally becoming more sensitized to the issue of rape by athletes. A move in the right direction, but this is a problem which has a long way to go.
Update, Friday. The QB is back on the team. The girl dropped the charges. Can't help but wonder what threats, or cash, were used to do the trick. (Jameis Winston's accuser felt so threatened she quit school. Sigh.) Also in the Sentinel today - over the past two years there have been 55 accusations of rape against sports figures in Florida's state universities. Not one conviction. For a moment, a glimmer of hope . . . quickly quashed.

Returning to our August cruise on Royal Caribbean's Freedom of the Seas . . .

I know it's hard to believe, but our ship had an ice-skating rink - and professional skaters who put on a spectacular show. Amazing!

As we approached St. Thomas, I went out on deck to experiment with my new Samsung smartphone. It was so windy I never got near the rail, settling for steadying myself against something solid just outside the door. I was concentrating on working with my new "camera" and never noticed the photobomb I captured until I was looking through my photos to select shots for this blog. (I think - I hope - that's a bathing suit!) 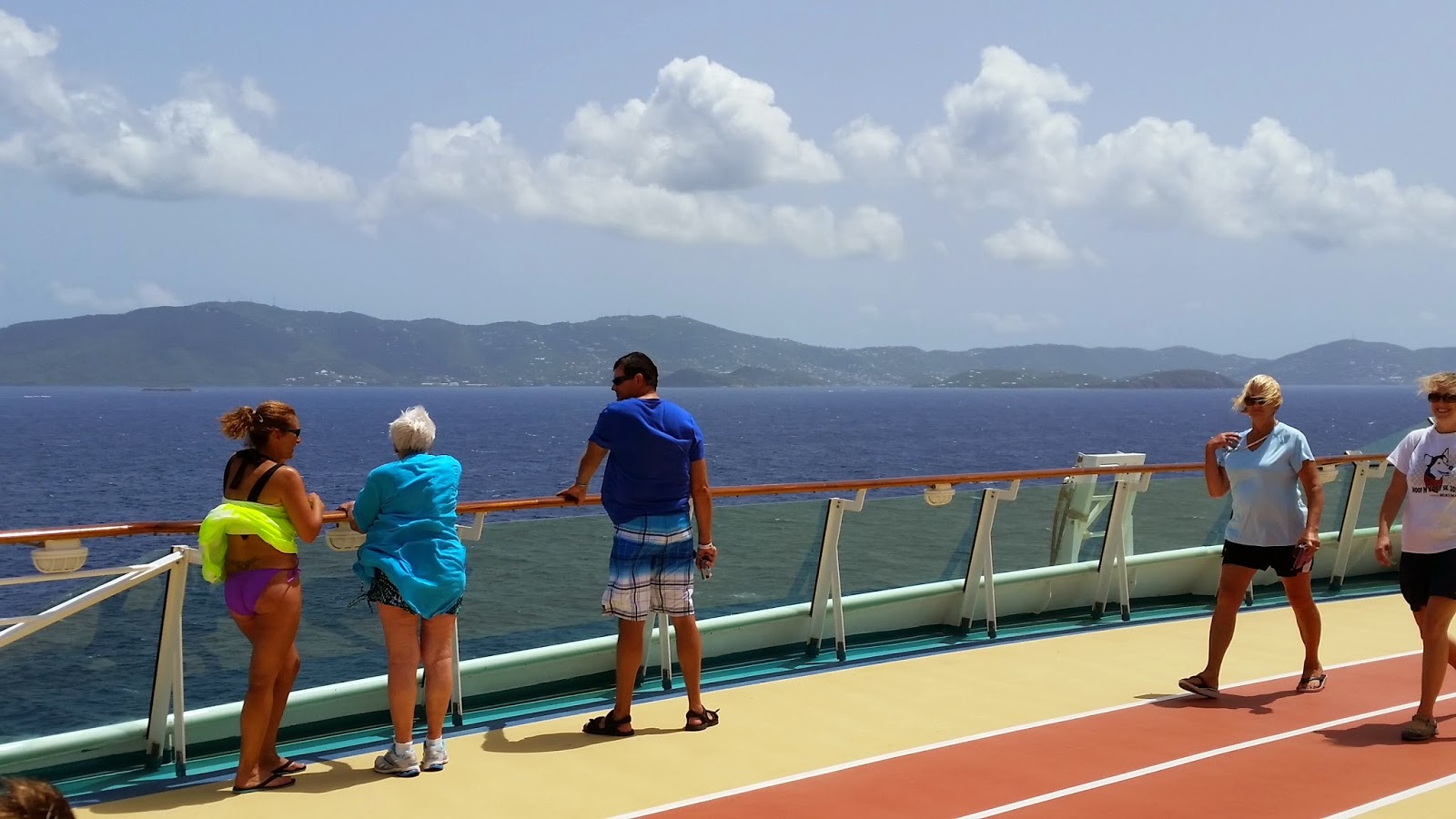 After thirty years in Florida, it was an amazing experience to be climbing hills again, plunging down precipitous roads and around sharp bends - the kind that use mirrors or require a honk! At times I felt almost like I was back in Peru riding the twists and turns of the Hiram Bingham road to Machu Picchu.

A couple of special notes before we say goodbye to St. Thomas . . .

I arrived at our island tour site early and had time to chat with one of the drivers. She told me they had had a 4.6 earthquake the night before. Surprise. Though why I was surprised after what happened in Haiti, I don't know. I guess I always think of St. Thomas as idyllic.

There was another surprise when we stopped at a beach to let some of the passengers off for swimming. While sitting in the open-sided tour vehicle, I noticed an odd-looking creature scampering across the parking lot. A mongoose, the driver told us. A mongoose? Really? It shot into the woods before I could even raise my camera, so no photo. But it seems they were imported back in colonial times to help with the snake problem. We also caught glimpses of iguanas sunning themselves in people's driveways, but since we have those in Florida, they weren't such a startling sight.

A final array of tour photos will finish out our Freedom of the Seas cruise later this fall.