Before I get to a true story dating back to World War II, here's a pic of the Tavares Steam Train. Seven of us took their "Santa Ride" this week, and I must say they do it well. Not only Santa and Mrs. Claus, but singing elves, a chorus of white-coated singing chefs, plus cocoa, cookies, and a ride past Lake Dora and lovely decorations on both sides of the tracks.  There is also an open wooden car with benches, plus a genuine caboose. A truly fun experience. (And a voucher for all of us for a free ride when the train isn't confined to a half-mile of track, due to repairs!) 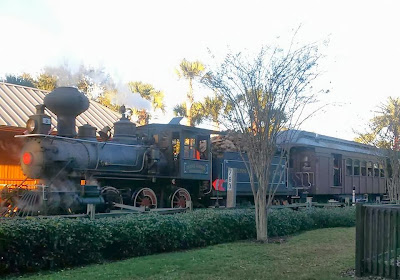 My husband loved to tell this tale - I even helped him write it up for a religious magazine a quarter century ago. He is no longer with us, but this is such a nice story, I'd like to keep it alive.

My husband was fortunate in his war experiences. Refusing officer training since all new officers were being sent to the Pacific and he wanted to see Europe, he ended up as the Staff Sergeant for the Colonel in charge of an Ordnance battalion, stationed near Bath, England (where he learned "change ringing"). The battalion's primary duty was preparing vehicles, especially tanks, for what would be the Normandy invasion. After the invasion, his battalion tagged along, keeping everything in good repair.

On Christmas Eve they were bivouacked near a nameless French village. (The Germans had removed all mileage and town signs.) My husband and a friend decided to walk into town, and on the way they passed a small Catholic church. Since my husband was interested in both European architecture and organs, they tried the door, found it open, and went inside. And, lo and behold, there was an ancient pump organ. My husband immediately tried it but found it lifeless. (He was one of those gifted people who could play by ear.)

The two soldiers continued their walk and were invited into a French home and fed supper. While there, they attempted to ask about the organ, but the language barrier was total. On their way back to base, they entered the church once again, took the organ apart, laying each piece along the front benches of the church. They then spent the night repairing and putting it back together. (And perhaps not surprisingly considering they were in Ordnance, it worked.)

The only problem, no one came near them that entire time. They never found out the name of the village, never knew if the villagers discovered the organ was usable again. My husband always hoped, of course, that people in that French village considered it "the Christmas Eve miracle of the restoration of the organ."

My husband was Elliott H. Kone, who later founded the Yale Audio-Visual Center and the Yale Guild of Carillioneurs. He was Jewish.

For those who missed this really unusual no-bake treat the last time I posted it:

1. In a heavy saucepan, melt chocolate chips and butter over low heat, stirring occasionally. Stir a small amount into the beaten egg, then return all to pan. Cook and stir over low heat for 2 minutes. Pour into a bowl; let cool for 15 minutes. Gently stir in marshmallows and nuts. Chill for 30 minutes. (I stirred the chocolate mix into the marshmallow mix - no difference.)

2.  On a long sheet of waxed paper, shape dough into a 1½-inch-diameter log. Place coconut on another sheet of waxed paper. Gently roll log over coconut to coat sides. Wrap up tightly, twisting ends to seal. (I twisted & clipped with plastic clothes pins.)

3.  Freeze for 4 hours or overnight. Remove waxed paper. Cut into 1/4 - 3/8" slices. Store in an airtight container in the refrigerator.

TIP: Stash a batch of cookies in a plastic container in the freezer for use anytime. They unfreeze very quickly.

** The only place I've found colored mini-marshmallows is in the baking section of a Super Wal-mart.


~ * ~
A Very Merry Christmas to my Christian readers
A Most Sincere Happy Holidays to those of other faiths
And may 2014 be kind to us all.