I ran into a great quote this week - I sat there, Kindle in hand, and howled. (Of course the males among us may not find it as funny.) From A Study in Silk by Emma Jane Holloway - the young heroine is supposedly Sherlock Holme's niece. Speaking, her Holmes grandmother, mother of Sherlock:

"Finding a proper husband is rather like selecting a hound. They all have more bark than bite, my girl. One day you'll look across the breakfast table and realize the only option left is obedience training."

A few years ago I traveled to Portugal and Spain with my daughter-in-law and her sister. The photos are scanned from Kodak moments as I resisted giving up my Nikon for digital until it simply stopped functioning one day. Nonetheless, the trip was somewhat off the customary European tourist routes, and I hope some of you will find the photos of interest.

After our all-night flight from the U.S., we were dead tired but decided we should take advantage of our only free time in Lisbon. So we walked from our hotel to the Lisbon zoo, a delightfully large and shady place where we seemed to be the only tourists, something that's always fun. (People stared at us as if we were part of the exhibit.) 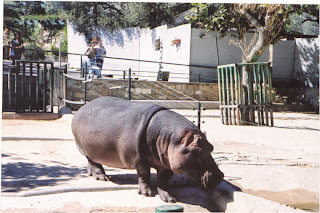 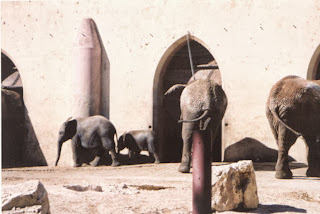 If my memory doesn't fail me, this is the fort where Portugal's great explorers had to bring the treasure they found in the New World. (That's right, the government got it. Presumably the explorers were amply rewarded, however.)

The next day we were off to see the more of Portugal, starting with the walled city of Obidos, one of the very few where the entire ancient city wall is still standing.

Below are modern-day versions of the boats Wellington used to cross the Douro River at Oporto and surprise the French, who were expecting him on the other side of town. (1809, during the Peninsular War against Napoleon.) The boats, once used to haul grapes to the wineries, are now mostly for pleasure. But the creation of "port" continues, unabated.

Addendum for BeauMonde members who want to see a "ha-ha":