I'd like to share the cover for my Romantic Suspense, Florida Wild, to be published by Ellora's Cave Blush sometime in the not too distant future. Unlike my Golden Beach RS, this one is set in the greater Orlando area. Way, way in the background you can see the wooden rollercoaster that is featured at the beginning and end of the book. 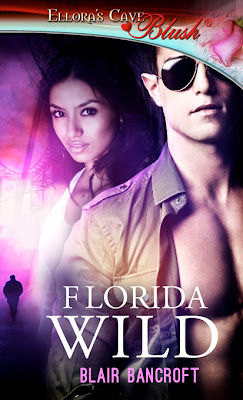 When I submitted a workshop proposal to the Moonlight & Magnolias conference, I promised to have a new high res photo taken (the one I sent to M&M was more than a decade old). Truthfully, I'd like to use the one from twenty-five years ago, but . . .

My proposal was accepted, I turned to my daughter for recommendations, and found a local photographer named Simo Drissi. My photos—an amazing number in constantly changing poses—were taken outside in a small shopping center park. Simo and I agreed on our #1 choice, the one I call the "Blair" photo. The smiling one (Grace) I added as an extra for Facebook & Twitter. The third was my daughter's choice, forcing Simo to grind his teeth to make my stubby nails look decent (the only French manicure of my life!)

I post the photos here as a recommendation for Simo because strict anti-promo rules on RWA author loops make it impossible to do it there. But every professional needs a good photo, whether for the back of the book, social media, or your business card. And I think you'll agree if he can make me look good at my age, just think what he can do for someone much younger! I would also like to give a hearty thank-you to my talented hairstylist, Ileana Arroyo, from Penny's salon at Fashion Square Mall. And to my daughter, my makeup artist. During the decade or so she sang professionally, she worked as a makeover specialist at the cosmetics counters of a several large department stores in both Sarasota and Orlando. She is now a real estate investment broker and mother of the three cherubs you occasionally see on this blog.


Hmm, did my daughter like the one above because it looks like
Mom is about to say, "You're grounded!"?


Thanks for stopping by.
Grace
Next week: "How Does Your Novel Grow?"