The "Steampunk" I've been talking about for some time now is finally out, and I know some of you may be asking, "What on earth is Steampunk?" A quick, highly personal definition might be: alternative history set in a dark, gritty period c. 1875-1910. Stories are often centered around Britain & continental Europe and feature steam machines and intricate clockwork devices. The most well-known symbol of the period:  the airship (dirigible). The human attitudes, however, are more "punk." Modern concepts, such as female equality, exaggerated garb, communication devices, and even "computers" crop up in Steampunk.

Airborne - The Hanover Restoration, however, is a  Steampunk "What if." I asked myself how it all began, say, forty or fifty years earlier than most Steampunk novels. And since I was accustomed to writing Regencies, I extended the "feel" to the next generation and set my story in 1840. Basically, Airborne is a traditional Regency, set twenty years later, and with a bit of more drama than most trads. A 20% free read is available at Smashwords. https://www.smashwords.com/books/view/161141.

There is also a partial free read on Kindle. http://www.amazon.com/Airborne-The-Hanover-Restoration-ebook/dp/B0082B6F12/ref=sr_1_1?s=digital-text&ie=UTF8&qid=1336845785&sr=1-1  Hopefully, most of my Regency fans will enjoy the Regency feel, and my Suspense fans will enjoy the drama of the restoration of the Hanoverian dynasty to the British throne. 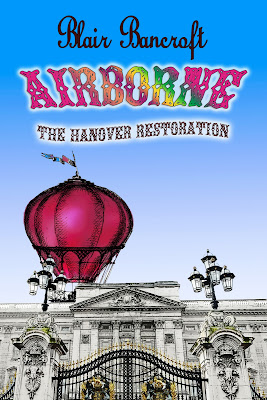 Miss Araminta Galsworthy travels to the home of her new guardian, Baron Julian Rochefort, an inventor like her father, only to find herself hastily married, shot at, and attacked by evangelicals who consider her husband's airship the work of the devil. She is also expected to play hostess to a bevy of guests, all of whom seem to be engaged in treason. Their intent: restore the monarchy, which was seized eleven years earlier by the Duke of Wellington, now Lord Protector of the Realm.  Minta finds the concept shocking, as she was only ten when Wellington took over the government. Lord Rochefort's enemies are now legion:  rival aeronauts from the continent, rival monarchists who want to place the Duke of Cumberland on the throne (or possibly the Duke of Cambridge). And a wily Wellington, who has allowed an already autocratic nature to grow into despotism over the course of his reign.

Minta struggles to adjust to new friends, new enemies, a new husband. To the concept of being an integral part of a revolution. Not easy for a girl just shy of her majority. But she finds her way past all obstacles, to become an important part of the great day when Lord Rochefort sets down Aurora, the world's first airship, in Hyde Park. All does not go as planned, however, and Minta almost loses her chance to live a life where she, not Aurora, is the center of her husband's universe.

Grace
Coming next: another installment of EDIT THE BLASTED BOOK (a list of Don'ts)