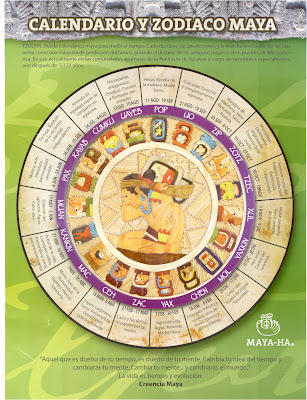 The legend above this reproduction of the Mayan calendar reads: TZOLKIN. Calendar wheel system of measuring time. Every single day has its own omens and associations. The inexorable passing of days acts as a kind of perpetual fortune telling machinery. Guiding the destinies of the Mayas and all the native peoples of Mesoamerica. It is still in use in an unchanged form in the outback, under the care of specialized calendar priests, after 5,123 years.

(And, no, my Spanish isn't that good. The opposite side of the sheet above is in English!)
~ * ~
Below: the hand-made wooden reproduction of the Mayan calendar I couldn't resist purchasing.

Will the world end on D 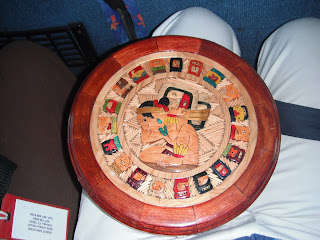 "No way," said our guide to the Mayan ruins of Tulum. His mother was Mayan, he informed us, and a man more dedicated to his heritage you could not find. He went to great lengths to praise the bus load of us off the Carnival Paradise for choosing the ruins over swimming, shopping, etc. And he absolutely, positively assured us that on the morning after the Mayan calendar runs out, the sun will rise, and the calendar will simply recycle, reverting back to its beginning.

My son and I felt privileged to have "Tour Guide Juan" as our mentor for the day. We couldn't help but wonder if the other guides were as dedicated. His extensive knowledge of his subject continued as he led us through the ruins at Tulum, including showing photos he had taken at summer and winter solstices and at the fall and winter equinoxes, each showing the sun shining through an exactly placed opening in the Mayan temple complex. 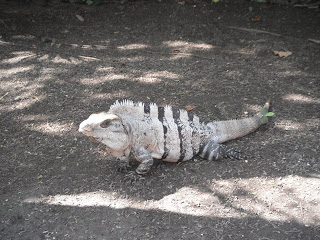 As we walked into the ruins, I'd swear they trained that iguana to pose. He just sat there and let my son take a dozen photos!

We walked through a tunnel in a rock wall, and there it was - according to Juan, the only Mayan city on the water. 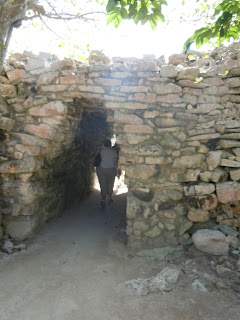 Among the many things Juan told us about the Mayan culture is that chocolate is a sacred drink, used in religious ceremonies, particularly weddings. This is still true today, not just in the heyday of the Mayan culture.

He also admitted that the Mayans' worst enemy was the Mayans. And that fighting among themselves was weakening the culture even before the arrival of the Spanish. 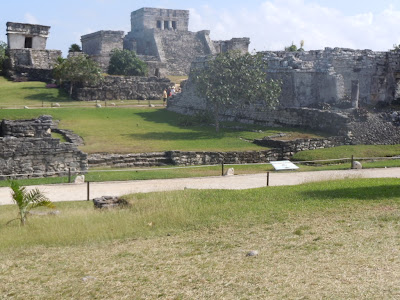 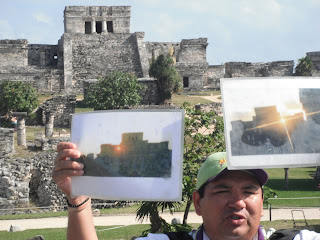 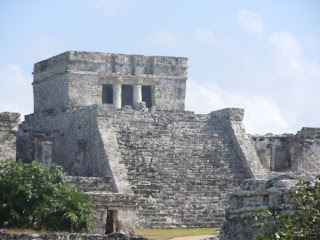 Above, the Temple of Tulum, the center of a city that once extended over a square mile.

Our guide displaying two of his photos of the sun shining through a carefully placed opening on the morning of the summer solstice.

A close-up of the temple.

For someone who had been twice to Machu Picchu in Peru but never seen a Mayan ruin, Tulum was the highlight of our January cruise. Warning: you have to put up with some aggressive vendors - all working for "foreign" owners, according to our guide! - before you can start the walk in to the ruins. It's almost like running a gauntlet. Sigh. But the ruins are worth it. At least if you're a history buff like me. If you go anywhere near Cozumel, don't miss it!

Thanks for stopping by Grace's Mosaic Moments.
Posted by Grace at 8:36 AM