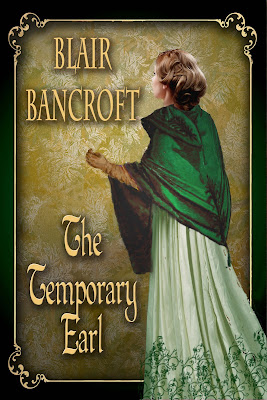 Available on Kindle & Smashwords - available soon on Nook, Sony & other e-readers
All Major Charles Tyrone wants to do is forget his soldiering days and concentrate on making a success of his new engineering company. But Fate has other plans. Although an obscure third in line as heir to the Earl of Wyverne, Charles is suddenly catapulted to head of the family when the old earl suffers a stroke, the heir is killed, and Julian, the heir’s only son, is in a coma from a curricle-racing accident.

As if that weren’t enough, the major is confronted by Lady Vanessa Rayne, a ward of the old earl, who has been running the household very well without his help, thank you very much. Animosity between Charles and Vanessa is further exacerbated by the earl’s determination that they shall marry.

The efforts to restore Julian to health are considerably hampered by a plethora of relatives, two of whom follow Charles in the line of succession. Mr. Ambrose Tyrone is the local vicar; his mother, a woman accustomed to ruling the roost. Mr. Godfrey Tyrone, a London dandy, arrives at Wyverne Abbey with his young sister, fluttery mother, and his mother’s latest “friend” in tow. Not exactly welcome visitors in a house with two bed-ridden patients.

When hints of murder and attempted murder begin to rear their ugly heads, Charles calls on the support of some of the soldiers once under his command, but even that isn’t enough to keep Julian, Charles, and even Vanessa from harm. Yet in spite of being caught in the midst of murder and mayhem, Charles and Vanessa begin to suspect that it truly is possible for the daughter of a duke and a lowly engineer to fall in love. If they live long enough to enjoy it.

“The very talented Blair Bancroft has added another diamond to the Regency treasure chest with the tightly plotted and delightfully executed The Major Meets His Match.”*
[* now titled The Temporary Earl] Teresa Roebuck, Romantic Times

“It’s a vibrant and fun-filled glimpse into a time long ago, and I highly recommend it to . . . any fan of romance. It has all the qualities that we look for, regardless of the time period. Don’t miss it. It’s a keeper!” Celia Merenyi, A Romance Review

Thanks for stopping by, Grace
Posted by Grace at 11:03 AM